We continue with the daily reports from the Pordenone silent film festival supplied by The Mysterious X (which I have decided is a suitable name for our determinedly anonymous reporter), having reached Wednesday 7 October. And it was a day that started off with what undoubtedly would have been your editor’s highlight of the week, had he only been there. Alas, alas.

Firstly, may I add my apologies to John Sweeney, and indeed Donald Sosin, for misattributing the piano work on Monday … I did double-check at the time, and than forgot to write it down … fatal.

It’s an early start for fans of the crime thriller, but well worth it … because the very first film was the utterly splendid A Canine Sherlock Holmes (UK 1912) preserved and presented by the Nederlands Filmmuseum; around 3/4 parody, yet also partly in the tradition of Rescued By Rover, our hero here is a fairly nondescript-looking terrier, rejoicing under the name of Spot (in the catalogue named as Spot The Urbanora Dog, which raises hopes that there be more films starring the little chap … Mr Editor?) (Alas no, but the world’s archivists must go and hunt for some as a matter of urgency. Ed.). He has an aristocratic detective owner, but there is no mistaking who is decidedly the brains of the outfit; I really want to describe the detecting, the trailing of the thieves and the ruse employed by Spot to gain entry to the hideout, but this is a film you will want to see without too much in the way of pre-formed ideas … so let me say that Spot is the most accomplished canine actor I’ve seen since Eddie in Frasier … 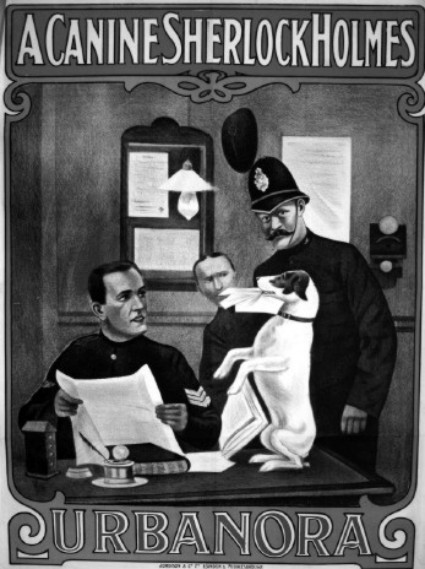 The Mystery of Dr Fu Manchu episode today was The Clue of The Pigtail (UK 1923) which rattled along efficiently and featured a decent stunt; a three or four-storey dive into a Thames dock somewhere off ‘Chinatown’ … cue re-use of Stoll’s Chinatown sets, interiors and exteriors, from The Sign of Four. The ersatz Holmes adventure, William Voss, Der Milliondieb (Germany 1916) was interesting, with a good plot about automata, impersonation and fraud, but exceedingly leisurely pacing within the film – langourous shots, loose editing – all but wrecked any pleasure. It may be unfair to compare films made seven years apart in this era, but after the Stoll serial, this did drag.

From Albatros, or rather their predecessor company Ermolieff, came Le Quinzieme Prelude De Chopin (France 1922) a film with a lot to interest outside of a pretty melodramatic plot, though that was handled well by Tourjansky, who made it seem just about believable … the film invests the Chopin piece of the title with near-magical powers to both calm but yet also bring people out of depressions … equally beloved by the cuckolded father of the family in the film, and the disabled young man next door. The playing for the film by Mauro Colombis was simply superb, borrowing heavily from Chopin as you would expect. The more unexpected treats within the film, early on before the family unit collapses, are extended sequences of home cinema evenings, with (well-faked) Chaplin comedies being projected by a hand-cranked Pathe (possibly 28mm?), later inspiring some creditable Chaplin impersonations, improvised by the young boy of the house.

My first Collegium session of the week was on the subject of colour restoration techniques, hosted by Haghefilm; I’m not any sort of technician so some of this went over my head, but it is heartening that work continues to be done to try and improve both digital and traditional restoration techniques; and that there may be mileage in combining Desmet toning with traditional dye tinting … which means there would be no need to use the potentially dangerous chemicals used in traditional toning, and yet could give more subtle, and closer to the original, effects than Desmet tinting and toning which can seem overcoloured. I think I’ve got that right … hopefully someone will inform me if I’ve got that wrong. 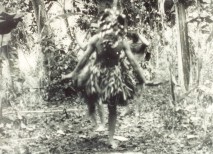 Back into the Verdi for the programme of short British films with the theme of sound and music; some experimental sound on disc films, some just about music. Based heavily on the programme curated by Tony Fletcher for the British Silent Film Festival at the Barbican in London this June, it included some real gems … the highlights being the combining of anthropoplogical film with cylinder recordings both made on the same expedition to the Torres Strait peoples in 1898 (left); a short actuality of children dancing what seemed to be a clog morris to a street barrel-organ; Seymour Hicks and Ellaline Terris in a series of song and dance showcases; a proto-bouncing-ball film for The Tincan Fusiliers, and my personal favourite, a circa-1911 Hepwix Vivaphone – a film made to accompany a pre-existing disc – Are We Downhearted? No! a song that would be reworked in the trenches of WW1 but here in its original form, performed (well, mimed to) by a cast of Hepworth stalwarts with real verve and energy.

I ducked Rotaie (Italy 1929) from the Canon thread; needless to say everyone who saw it rated it very highly … but returned for La Dame Masquée (France 1924), from Albatros – described in the catalogue notes as misogynistic, I read it slightly differently; to me, only the heroine had any redeeming features; all the men were venal, cheats, blackmailers or whatever, the Aunt figure no better; the Uncle weak and vacillating until stirred into action in the final reel of what had by then become a superior episode of Dr Fu Manchu … but it held the attention, and the freshly-arrived Neil Brand probably improved the experience no end. 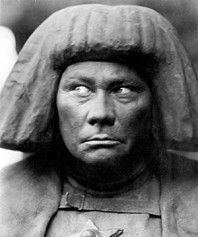 After dinner a special event; a performance of Betty Olivero’s score, for a quintet, for Der Golem (Germany 1920) conducted by Guenter Buchwald; it employs a string quartet plus clarinets to evoke both the medieval ghetto and the palace seen onscreen; a klezmer palette for the ghetto, courtly dances for the palace … beautifully played, and the players richly deserved the sustained applause. It’s a very strange film though, and despite repeated viewings I can’t help but think that, though within it there are a series of iconic and influential images, it doesn’t quite succeed as an entity … too uneven in tone? Maybe it’s just me.

The last film of the day was a city symphony film, Etudes Sur Paris (France 1928) by André Sauvage, which I declined for a quick couple of glasses and a relatively early night …

And so we bid farewell to day five of the Giornate del Cinema Muto. Stay tuned for what will unquestionably be day six, coming up soon.