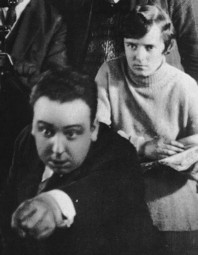 There has been, in recent years, a growing interest in women filmmakers in the silent period. Early cinema offered greater opportunities for women (in some countries, that is) to make a mark in the film business than would be the case for decades thereafter, and if the number of women directors was few (Alice Guy, Nell Shipman, Lois Weber, Esfir Shub and Germaine Dulac are among the most notable names), once you look more widely to production, scriptwriting, editing, lab work, criticism, continuinty, cinema management, projection, and acting of course, the numbers begin to grow.

It is with an enthusiastic spirit of investigation and a determination to reblanace early film history that international and national projects have been launched. Internationally, there is Duke University’s Women Film Pioneers project, led by Professor Jane Gaines. And here in Blighty there is Women in Silent British Cinema. This is a lively project which has a team of researchers pursuing a fascinatingly varied group of names, from the reasonably well known (Alma Reville, Blanche McIntosh, Mary Field) to the tantalisingly obscure. Anyone interested to help join in should get in touch through the website – there are many names left demanding assiduous detective work to rescue them from obscurity.

Next up for the project is a study day taking place at the BFI Southbank in London on 7 November, entitled Women and Silent Britain 2: Writers. The day will consider all aspects of writing for the screen by women involved in the British cinema industry of the silent era, whether as screenwriters, critics, columnists, publicists, or authors of source novels and plays. The day will feature the results of new research on critic Nerina Shute, novelist and director Elinor Glyn, and the prolific screenwrier Lydia Hayward.

The day will consist of screenings from the BFI National Archive, talks and workshops, followed by Adrian Brunel’s rarely screened silent classic The Constant Nymph (1928), based on the play of a novel by Margaret Kennedy and Basil Dean and adapted for the screen by Alma Reville (pictured above, with husband Alfred Hitchcock).