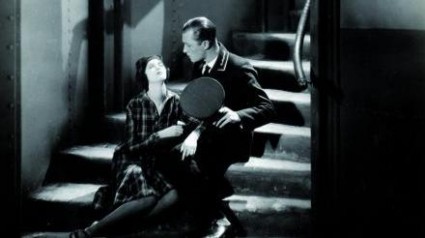 The programme for the London Film Festival has been announced, and though there’s not much in the way of silents on offer, it’s well worth noting what there is.

For the past two years the LFF has featured a programme of archive films on London, plus a London-themed silent feature, for exhibition in Trafalgar Square. This year the feature film is Anthony Asquith’s Underground (1928), an expressionist brew of love, treachery and murder set in and around London’s underground railways, starring Brian Aherne and Elissa Landi. That screens on Friday 23 October, while on Thursday 22 there is London Moves Me, a programme of archive film on the theme of London and transport. The programme includes cycling in 1896, trams in 1901, boats in 1905, canoes in 1922, barges in 1924, underground trains in 1929, and much more. The indispensible Neil Brand will accompany on piano. The Trafalgar Square shows are free, and just the sight of seeing crowds of commuters, tourists, the curious and the dedicated gathered on the steps to witness silent films beneath Nelson’s Column is an experience to savour.

(Correction: Underground is screening at the Queen Elizabeth’s Hall. Shame.)

The LFF has an archive film section, which features the pick of the restorations and star selections from recent archive film festivals. The silent to look out for is the Norwegian Laila (1929), which was the hit of the Pordenone festival in 2008, enthusiatically reviewed by the Bioscope at the time. I warmly recommend this engrossing, dramatic, human and beautifully photographed masterpiece, screening on October 29. It is everything that a silent film can be.

The other silent offering is J’Accuse (1919), a new, colour-tinted restoration by the Nederlands Film Museum, in collaboration with Lobster Films, of Abel Gance’s epic anti-war statement.