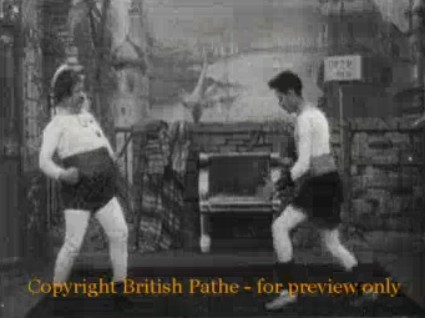 In the early, far-off days of the Bioscope I wrote two posts on the British Pathe collection of newsreels, 3,500 hours of freely-available digitised newsreels covering the period 1896-1970. One post was on the newsreels, the other on the early silent fiction films which lurk on the site, if you know where to look.

The site is still very much active, but after British Pathe was bought by private equity interests recently (the previous owner was the Daily Mail and General Trust) the site has undergone a revamp and has become that much easier for researchers to use. Previously you had to register to use the site, and to view any film you had to fill in personal details and then you could download a low resolution version. It was a somewhat laborious business, and in the new version (for which British Pathé has regained the acute accent on the e) the films are no longer downloadable Window Media files but are instantly accessible streaming files in Flash, without any of the form filling-in. Of course, it’s a little disappointing to not be able to take copies away, and it is disappointing also that the frame stills library has been removed, but the ease of access is a real boon.

The site is a marvellous resource for discovering silent film, and the life and times of the silent era. To remind you about what you can expect to find on the site, I’m going to reproduce some of my original 2007 posts. So, firstly, there’s searching for non-fiction material:

In 2002 British Pathe, owners of the Pathé newsreel library, put up the whole of its collection, thanks to a grant from the New Opportunities Fund’s NOF-Digitise programme. It was a controversial decision, because a commercial company was being given public money to do what some felt the company might have done for itself, but others welcomed a new kind of public-private initiative. The result for the public was 3,500 hours of newsreel footage from 1896 to 1970, available for free as low resolution downloads. Later 12,000,000 still images were added, key frames generated as part of the digitisation process. It was, and remains, one of the most remarkable resources on the net, and a major source for those interested in silent film.

Charles Pathé established the Société Pathé Frères, for the manufacture of phonographs and cinematographs, in 1896. A British agency was formed in 1902, and its first newsreel (which was the first in Britain), Pathé’s Animated Gazette, was launched in June 1910. This soon became Pathé Gazette, a name it retained until 1946, when it was renamed Pathé News, which continued until 1970. These newsreels were issued twice a week, every week, in British cinemas, and were a standard feature of the cinema programme in silent and sound eras.

Pathé also issued other films. It created the cinemagazine Pathé Pictorial in 1918, which ran until 1969. Eve’s Film Review, a cinemagazine for women, was established in 1921 and ran to 1933, while Pathétone Weekly ran 1930-1941. There were other film series and one-off documentaries.

All of this and more is on the site. Pathé were distributors of others’ films, some of which turn up unexpectedly on the site. For example, there are some of the delightful Secrets of Nature natural history films made by Percy Smith in the 1920s. There are also actuality films from before 1910 which Pathé seems to have picked up along the way, though not all of them are Pathé productions by any means – for example, assorted films from the Anglo-Boer War of 1899-1902.

For the silent period, researchers should note that the collection is not complete. For the First World War and before (what British Pathe calls Old Negatives) the surviving archive is patchy, and the cataloguing records less certain with dates. For the 1920s, the record is substantially complete – indeed, there is unissued and unused material as well as the standard newsreels. These of course show events great and small throughout the decade, with an emphasis on sport, celebrity, spectacle and human interest. Look out in particular for the women’s magazine Eve’s Film Review, a delightful series with an emphasis on “fashion, fun and fancy”. For silent film fans, there are newsreels of Chaplin, Valentino, Pickford, Fairbanks etc. There are all sorts of surprise film history discoveries to be made, such as a Pathé Pictorial on feature film production in Japan in the 1920s.

Then there are the fiction films:

Pathé somehow picked up assorted pre-First World War films, some though not all made by its French parent company, and these got digitised alongside the newsreels and are available on the site. There is no index to these fiction films, so below is a list of some of the ones that I have been able to find, with descriptions and some attempts at identifying them, as few are given correct titles or dates:

THE FATAL SNEEZE = comedy in which a man suffers from an increasingly violent sneeze. This is That Fatal Sneeze (GB Hepworth 1907).

THE RUNAWAY HORSE = comedy in which a runaway horse causes chaos. This is a famous comedy of its time, Le Cheval Emballé (FR Pathé 1907).

FLYPAPER COMEDY = This is a French comedy with Max Linder, in which Max has flypaper sticking to him which he then finds sticks to everything else.

THE FANTASTIC DIVER = early trick film in which a man dives into a river fully clothed then returns by reverse action in a swimsuit.

THE RUNAWAY GLOBE = Italian? comedy in which a giant globe intended for a restaurant runs away down a street and is chased by a group of people before being sucked up by the sun, only to be spat out again.

THE MAGIC SAC [sic] = French trick film in which an old man hits people with a sack and makes them disappear.

ATTEMPTED NOBBLING OF THE DERBY FAVOURITE = section from a British racing drama, made by Cricks and Sharp in 1905.

THE POCKET BOXERS = trick film in which two men place two miniature boxers on a table and watch them fight.

ESCAPED PRISONER RETURNS HOME = guards wait while prisoner bids a tearful farewell to his sick wife. This must be a James Williamson film, perhaps The Deserter (GB 1904).

LETTER TO HER PARENTS = extract from a drama at which elderly parents are upset at a message they receive.

ASKING FATHER FOR DAUGHTER’S HAND = scenes from a film where a fiancée has to prove himself to the father.

HAVING FUN WITH POLICEMEN = British comedy in which two legs stick out of a hole in an ice-covered pond, placed there by boys to trick a policeman.

POINT DUTY = a policeman is run over by a car and put back together again. This is How to Stop a Motor Car (GB Hepworth 1902).

THE MOTOR SKATER = comedy where man buys a pair of motorised skates and causes chaos.

RUNAWAY CYCLIST = comedy where man buys a bicycle and causes chaos (as can be seen, this was a common theme for comedies of the period).

FIRE = mixture of actuality film of a fire brigade and a dramatised fire rescue. This is Fire! (GB Williamson 1901).

THE DECOY LETTER = early, rudimentary Western, where a soldier lures away an innkeeper with a decoy letter and attempts to assault his wife.

THE RUNAWAY CAR = French comedy in which three men try to ride a bicycle and then a car.

RESCUED BY ROVER = a dog finds a kidnapped baby. This is of course the famous Rescued by Rover (GB Hepworth 1905).

One other point. British Pathe used to be managed by ITN Source and available from that company’s website as well, but the licensing deal has come to an end and all of the Pathé films have been removed from the ITN site.