Thanks are due to the Bioscope’s continental Europe correspondent, Frank Kessler, for this delightful YouTube clip. It features Maud Nelissen, regular accompanist for silent films at the Nederlands Filmmuseum, playing a Fotoplayer organ at the Utrecht musical museum Van Speelklok tot Pierement. Her explanation is in Dutch, part of which is to announce an upcoming screening in Utrecht, which was on 18 April, so apologies for being a bit late with that, but the Fotoplayer itself plays on.

The photoplayer (the Fotoplayer itself was one make, produced by the American Photoplayer Company) was a form of player piano, electrically-driven, with augmented orchestral effects, including organ pipes, percussion instruments and assorted sound effects (whistles, bird song, thunder etc.). The organ could be played manually, as shown above, but it also took piano rolls as with a conventional player piano, each of which would be designed for particular genres and scenes. An operator (often an usherette, it is said) would therefore have to switch from one roll to another as the action changed.

Photoplayers were first introduced around 1910, and were produced in their thousands in the United States. Generally they were installed in smaller cinemas throughout the silent era, as the amplification was not good enough to larger theatres. Their peak years were the late teens, and production tailed off after 1925. Only a hundred or so exist today. In part they were dumped once the talkies arrived, in part they suffered greatly from the wear-and-tear of all-day operation.

There is more information on the Fotoplayer at The Musical Museum and The Encyclopedia of Australian Theatre Organs.

Now would one of those be fun to have at Pordenone? Possibly a little tricky to transport, but even so…

Update (December 2009):
Maud Nelissen has kindly sent me four photographs of the Fotoplayer in action, with these notes on its performance:

First we explained how this great Photoplayer was used in the earlier days. Then we started our programme:

1) First we showed a film with the musicrolls in the piano and the effects (made by us, by pulling, pushing ropes, buttons etc).

2) Then we showed a Chaplin programme: The Cure, The Rink and Easy Street.

The Photoplayer’s piano was played by me, and I had a very valuable assistant (Daphne, musician of my band The Sprockets) who did marvelously all the effects and was running around me like a madwoman to get everything totally synchronised with the Chaplins. It was incredibly funny and the audience loved the films even more through it!

Although it looked very loose and vibrant at the time … we had numerous rehearsals and Daphne practiced the effects at home (she made a “practice” installation, pulling ropes without sound + running around … can you imagine …?)

Our next aim now is to visit all the remaining photoplayers in the world, We have a great show to put on and we adore the photoplayer!! Daphne is thinking about a career switch, leaving The Sprockets to become a fulltime photoplayer-player. Who knows … Luckily there will always be Utrecht! 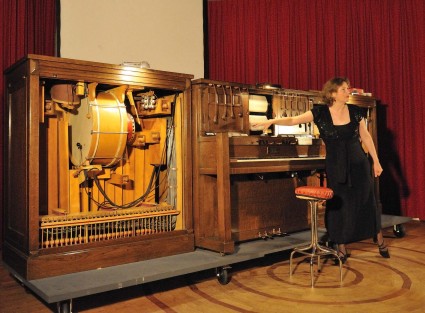