Two interviews from the recent Killruddery Silent Film Festival, made by Irish company DOCUMENTAVi, have appeared online. The first is with Kevin Brownlow, an engaging twenty-minute film in which Kevin ranges widely over a lifetime promoting the silent film. He discusses discovering silent film while at school, the first films he collected, befriending silent directors (Al Parker in particular) and the task he took on of interviewing those who made the silent film. He covers film festivals, the Thames Silents series, Ireland and silent film, the power of silents experienced live as opposed to online or on TV, and the importance of live, ‘authentic’ (he is amusingly scathing of the taste for modern rock groups to dabble with silents). It’s a delightful encounter.

Then, looking somewhat bleary-eyed, as anyone might who had just accompanied three silents in a row at the festival, pianist Stephen Horne talks about how he got into providing music for silent films, how this combines with the work he does accompanying dance, and his recent experiences performing the ‘original’ score for The Battle of the Somme. It’s an eloquent, informative seven-minute piece.

Talking of the estimable Mr Horne, he can be heard this Sunday at the Barbican in London, accompanying Guiseppe di Liguoro’s L’Inferno (1911), together with percussionist Martin Pyne and a smattering of electronic samples amid the piano accompaniment. Stephen assures me that it will be nothing like Tangerine Dream (whose DVD score for the film has pained many – doubtless Kevin Brownlow among them), so there’s every reason to go along and catch the Dante-inspired film which caused such a sensation in its time (chiefly on account of copious nudity among the damned). Fragments from a second 1911 L’Inferno, directed by Giuseppe Berardi, will also be shown, apparently for the first time in the UK. 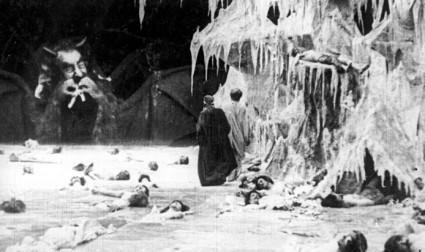