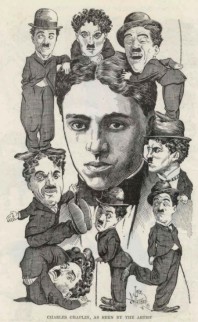 The 120-year-old Charlie Chaplin (as of two days ago) is the subject of a conference taking place 28-30 October 2010 at Ohio University Zanesville, Zanesville, Ohio. Charlie in the Heartland: An International Charlie Chaplin Conference is inevitably at the early planning stage, but confirmed speakers include keynote speaker and honoree Charles J. Maland, professor and head of the University of Tennessee English Department and author of Chaplin and American Culture: The Evolution of a Star Image; David Robinson, author of Chaplin: His Life and Art; Kate Guyonvarch, director of Roy Export S.A.S. and the Association Chaplin office, Paris; Cecilia Cenciarelli, archivist and head of Progetto Chaplin, Cineteca di Bologna, Bologna, Italy; and Frank Scheide, Professor of Communications at the University of Arkansas and co-editor of The Chaplin Review.

The call for papers reads as follows:

In keeping with the theme of the conference, “Charlie in the Heartland,” which was chosen to commemorate Chaplin’s first trip to the United States with Fred Karno’s comedians in October, 1910, we are seeking papers in a wide range of areas, all to do with Chaplin, his relationship with, influence on, or evocation of America, either during or after his long residence here.

The following topics are meant to generate ideas for presentations, not limit creativity or exclude participation:

Individual papers or full panels are welcome to submit proposals.

Please send a 500-word abstract, a short bio and your contact information to Lisa Stein, Assistant Professor of English, OU-Zanesville, 1425 Newark Road, Zanesville, OH 43701 or via email by February 1, 2010. Graduate and undergraduate students are welcome to submit.

N.B. We have tried to make this an accessible conference for young scholars by offering several low-cost housing options, as well as a reduced registration rate. We will also have a student travel grant available for applicants. Check back in early 2010.

Attendees are also promised a Chaplin feature film plus shorts, outtakes and oddities; a Chaplin film parody competition; a Chaplin lookalike contest (is it to held among the attendees? This sounds to be a highly promising development for academic conferences); and a ‘juried art show: “America in 1910”.

More details are promised on the conference website in due course.