Crazy Cinématographe has returned, and has a fabulous poster to prove it: 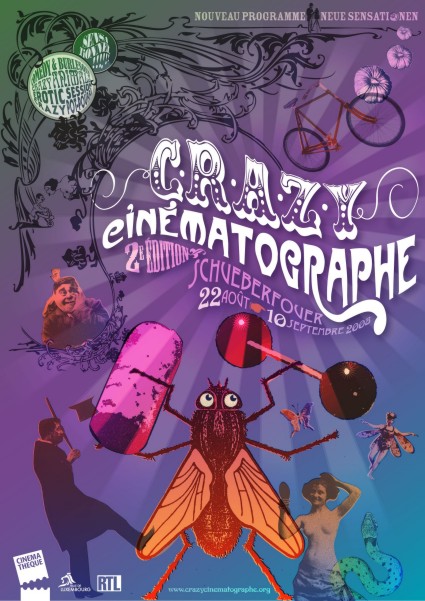 Last year saw the launch of Crazy Cinématographe, a project with multiple outlets based on the programmes of films shows presented in the touring fairground booths of Europe in the early years of the twentieth century. In 2007 it gave us a touring show (mostly in Luxembourg, but it also visited Germany, France and Belgium), a conference (in Luxembourg) and finally a DVD, published by the highly commendable Editions Filmmuseum. 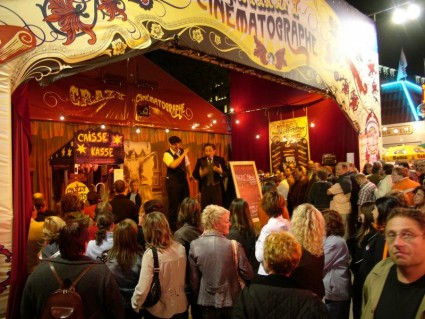 The Crazy Cinématographe tent in 2007

Except that it wasn’t ‘finally’, because Crazy Cinématographe edition 2 has been announced. Taking place 22 August-10 September in Schueberfouer, Luxembourg, the new show opens the tent flaps once more to present a highly variegated programme of bizarre and surprising early cinema subjects taken from fifteen film archives around Europe. There is now a Crazy Cinématographe site, with details of the programme, in German. Among the promised delights are acrobatic sisters, a ‘Cabinet of Crazy Animals’ (including Percy Smith‘s acrobatic fly, Max Skladanowsky‘s boxing kangaroo, monkeys dining in a restaurant, and – according to my translation software – rabbits eating giant snakes, though possibly it may be the other way around), an evening of early erotic films, a ‘Live-Mix Crazystyle’ by DJ Kuston Beater, and a ‘best of 2007’ programme. I’m promised more information in English, and will pass this on in due course.

Behind all the showmanship, Crazy Cinématographe is a bold and interesting attempt to combine scholarship with entertainment, or rather making an entertainment out of a scholarly enthusiasm, both for the archival films themselves and for the renowed ‘cinema of attractions’ concept (a cinema of spectacle that preceded the cinema of narrative), which has proved so fruitful in early cinema studies.

To give you a flavour of the entertainment, here’s the promo video (look out for the acrobatic fly at the end).

There’s also a video report on last year’s show (on YouTube, in French), which gives a good idea of the presentation style.