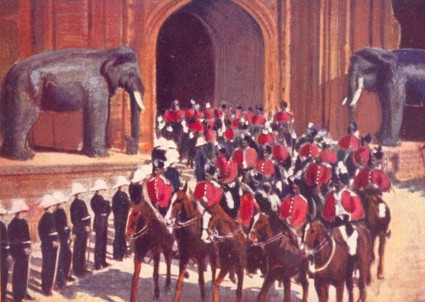 After something of a gap, we return to our on-going history of colour and the silent cinema by marking the end of Kinemacolor. The attention given to Kinemacolor so far in this series might give the impression that it was widely experienced by audiences. This was not the case. Ordinary cinema audiences were far more likely to experience colour in the form of tinting or toning, or stencil coloured prints. Kinemacolor films were restricted to theatres equipped with specialist projection equipment, often charging higher prices. Kinemacolor was a select entertainment. The impression it made was therefore on the wealthier sort (relatively), and there is plenty of evidence for people deciding to attend a Kinemacolor show would have never deigned to attend a film show previously. The film industry recognised how Kinemacolor was attracting new audiences, raising the possibility of a different, classier kind of film show in the future. Although the trade respected Kinemacolor for its technical achievement, its real significance was social.

Kinemacolor had started off in Britain in 1908. It received its commercial debut in February 1909, when it was first named Kinemacolor, and the Natural Color Kinematograph Company was formed to produce Kinemacolor films, both dramas and actualities – the latter always being the company’s stronger suit. Kinemacolor’s producer, Charles Urban, set about making a hoped-for fortune by licensing Kinemacolor across the world. The policy enjoyed mixed fortunes.

In establishing a system of international licences, Urban sometimes managed to sell Kinemacolor three times over: the national patent rights, the exhibition rights (for restricted periods, then to be re-negotiated) and naturally the exclusive Kinemacolor apparatus and films necessary to put on such programmes. The sale of patent rights was the most lucrative business, though they were negotiated for eight territories only. £2,500 was paid for Switzerland, £4,000 for Brazil, £6,000 for Holland, Belgium and Luxembourg, £8,000 for Italy, £10,000 for France, £10,000 for Japan, £10,265 for Canada, and £40,000 for the United States of America. Few made much money for the investors, a general get-rich-quick mentality having taken over. Kinemacolor was a hard sell, and few outside Britain really understood how to market something so out of the ordinary. The demise of the Kinemacolor Company of America, after high hopes, has already been covered, but the stories of France and Japan are of interest.

France
Kinemacolor opened in France with a special exhibition in Paris on 8 July 1908. A three month engagement began at the Folies Bergère from September 1909. The French patent rights were sold in 1912 to the Raleigh et Robert firm, which created a prestige centre for Kinemacolor exhibition in Paris at the Biograph Theatre, Rue de Peletier. In July 1912, an attempt to float an independent company, Kinemacolor de France to supersede Raleigh et Robert’s business failed when insufficient working capital was raised by subscription. The Natural Color Kinematograph Company bought back the French patents for £5,000 more than they had sold them for, and this led Urban to attempt to repeat the formula through purchasing the lease on premises in the Rue Edouard VII, Boulevard des Capucines, Paris. Here he undertook to build his very own theatre, the Théâtre Edouard VII in 1913. This extravagant move proved catastrophic, with the theatre taking too long to build, being too small in size (it seated 800), obscurely located, and tickets priced too highly. Urban lost tens of thousands, and Kinemacolor in France came to an ignominious end.

Japan
Japan was a comparative success story. The patent rights for Japan and East Asian were acquired in 1912 by the Fukuhodo company, which paid 40,000 yen (£10,000). The rights then passed on to Toyo Shokai. A three-hour Kinemacolor programme was given before the Emperor of Japan in August 1913, and in October the first commercial Kinemacolor programme opened at the Kirin-kan in Asakusa, Tokyo. Toyo Shokai reformed itself on 17 March 1914 as Tennenshoku Katsudoshashin Kabushiki Kaisha (Natural Color Kinematograph Company), abbreviated to Tenkatsu. Kinemacolor exhibition in Japan was well-managed and profitable, and local film production followed, predominantly fiction films, which were adaptations from kabuki plays. However, the onset of the war led to a sharp rise in the cost of film stock, and as Kinemacolor used double the amount of film to monochrome production, its use became restricted to special scenes in selected productions. After a gap of two years the last Japanese film to use Kinemacolor (and quite probably the last Kinemacolor film produced anywhere), Saiyûki Zokuhen, was released in July 1917, but the novelty had passed.

Charles Urban (centre) with camera team in Delhi for the filming of the Durbar, December 1912

The Delhi Durbar
In Britain Kinemacolor enjoyed four or five years of spectacular success, driven by its films of travel and actuality, in particular scenes of royal spectacle. Urban was fortunate that the rise of Kinemacolor coincided with a series of royal events whose ceremonial pageantry naturally suited the colur system, and which proved excellent subjects for export. The funeral of King Edward VII (1910), the coronation of King George V (1911), the investiture of the Prince of Wales (1911), and above all the Delhi Durbar, a huge extravaganza held in India to mark the coronation of the new King-Emperor (1911), all made Kinemacolor a must-see attraction for many. The Delhi Durbar films, entitled With Our King and Queen Through India (first exhibited 1912), lasted for over two hours and was more of a flexible multimedia show than a film as such, as its many component parts could be shifted about according to taste, and its showings were accompanied by orchestral music that copied that which was played at the event itself, a lecturer, and in its prestige screenings at the Kinemacolor London showcase theatre, the Scala, a stage that was made up to look like the Taj Mahal. This lyrical passage – a favourite of mine – from the British film trade paper The Bioscope sums up the awe-struck reaction many had to seeing the Delhi Durbar films, and Kinemacolor in general:

Last Friday evening, at the Scala Theatre, was an occasion in many respects as significant and memorable as it was wonderful. It may be left for future generations to realise the full extent of its importance – men and women yet unborn who, by the magic of a little box and a roll of film, will be enabled to witness the marvels of a hundred years before their age, in all the colour and movement of life. Perverse old grandfathers will no longer be able to indulge disdainfully in reminiscences of the superiority of the times ‘when they were boys’; the past will be an open book for all to read in, and, if the grandfathers exaggerate, they may be convicted by the camera’s living record. Man has conquered most things; now he has vanquished Time. With the cinematograph and the gramophone he can ‘pot’ the centuries as they roll past him, letting them loose at will, as he would a tame animal, to exhibit themselves for his edification and delight. The cinematograph, in short, is the modern Elixir of Life – at any rate, that part of life which is visible to the eye. It will preserve our bodies against the ravages of age, and the beauty, which was once for but a day, will now be for all time.

The end
Kinemacolor was not to be for all time. Its demise came not from the failings of the international licensees but destruction at the centre. In 1913 a court case was launched against the Natural Color Kinematography Company by Bioschemes, a company marketing a rival motion picture colour system, Biocolour, invented by William Friese-Greene. Biocolour was an additive system which employed film frames alternatively stained red and green, close therefore in principle to Kinemacolor. Bioschemes had struggled to get off the ground because its every move seemed to infringe the Kinemacolor patent. With backing from motor racing driver S.F. Edge, Bioschemes challenged the Kinemacolor patent’s validity in the courts. The Friese-Greene case was lost, but on appeal in March 1914 the decision was reversed. The appeal judge declared that the patent claimed to produced natural colours, but also stated that it did not reproduce a true blue, since it used only red and green filters. The judge declared that it could not therefore support its claim to be natural. So the patent was invalid.

The decision was catastrophic for Kinemacolor, because it destroyed the foundations on which the whole licensing scheme was based. However, it did not of itself mean that Kinemacolor was necessarily over. The system was there for anyone to use – it was just that Urban no longer could market it exclusively. But tied to specialised projection, and being more expensive to produce (as said, Kinemacolor films were double the length of conventional films), no one (outside of Japan) was prepared to make a go of it. 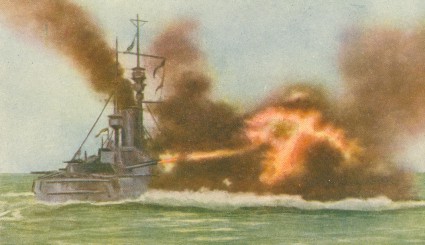 Urban did make a few more Kinemacolor films himself. With the outset of the First World War, he created another multimedia show, With Our Fighting Forces in Europe, which mixed library footage of troops and nations with some actuality film taken in Belgium in late 1914 – the only colour film taken of the war on land (none of this footage is known to survive today). Then for the British propaganda outfit Wellington House he made a documentary feature, Britain Prepared (1915), which included colour sequences of the British navy at sea off Scotland in October 1914. Some of these scenes were discovered recently in an American commercial archive, and are – I believe – now on their way to the Library of Congress. I’ll be able to say more on this later. (A monochrome-only Britain Prepared is held by the Imperial War Museum)

More later in this series also on Kinekrom, a would-be successor to Kinemacolor that Urban attempted to develop in the 1920s. But next up will be Gaumont’s Chromochrome, perhaps aesthetically the most sucessful of the pre-war colour processes, and then the winner of the colour wars – Technicolor.