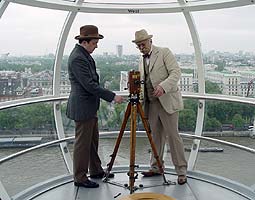 The Time Travellers of 1908, from http://www.gmfilm.co.uk

I’ve added a new section among the links for Modern Silents, a subject that, as regulars will know, has been covered here from time to time. Modern silents until recently were occasional curiosities (Le Bal), spoofs (Silent Movie), imitations of slapstick (The Plank), eccentricities (Juha) or lacked dialogue merely because they featured dinosaurs (One Million Years B.C.). But the arrival of cheap digital equipment, broadband and YouTube has encouraged experimentation in this field (as it has in so many others). More than that, there seems to be growing interest in the stylistic tropes of silent cinema as an means of expression today among a number of accomplished filmmakers, of whom the Canadian Guy Maddin is the best known.

The Bioscope will continue to pay attention to such work, so let’s kick things off afresh by looking at Martin Pickles. He is a British filmmaker, whose G.M. Film site is named after his 2001 film G.M., which took its title and inspiration from Georges Méliès. Pickles does not produce pure silent films so much as work with the aesthetic and historiography of silent film in creating some of his own work.

Take, for example, Time Travellers of 1908. This short film follows two explorers, using a time-machine shaped like a movie camera, as they visit 21st century London. It was shot entirely on Edwardian hand-cranked cameras with original lenses, and the soundtrack recorded on a 1909 Edison phonograph. There is a real sense of modern London viewed anew (is it accident or ingenuity that makes their first shot of modern London a view of Trafalgar Square taken from much the same spot as Wordsworth Donisthorpe chose for his proto-movie of 1890?)

Or there’s G.M. itself, in which an Edwardian gentleman (looking not unlike Georges Méliès) is tormented by spirits who appear through holes in the wallpaper. In the simple but effective Camera Obscura a man dreams of a ballet dancer but finds himself literally tied to his office desk. And Trafalgar Square makes another appearance in Century’s End, a ‘film-poem’ of London filmed between midday and midnight on 31 December 1999, shot on 16mm at 16fps but telecine-ed at 25 fps, as Pickles says, ‘in order to give it the jerky look of an old Edwardian film’. One would usually protest at the notion of silent films being jerky and run at the wrong speed, but here the choice is knowing and apposite.

All these and more are available as QuickTime movies on the G.M. Film site, with background explanations on their production, rationale and funding. All are short, all are ingeniously creative. Seeing such work makes you realise how silent films will continue to have a creative life because they represent a form of artistic expression which is now set in time. They constitute a vision of things, a discrete way of telling stories, that will always have an appeal to some filmmakers. There was far more to silent films, even (or especially?) early silents, than the relatively simple aesthetic referenced in Pickles’ films, but what matters here is not the pastiche but the acknowledgment from today of a particular way of seeing things. They are an act of time travelling, whether we view the originals or whether we endeavour to imitate them.

I’ll keep on the lookout for more such filmmakers, and would welcome any recommendations.