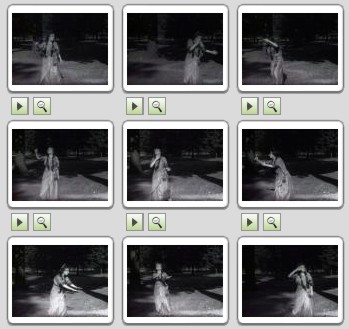 Mary Williamson in The Death of Minnehaha (1913), from http://videolibrary.gallaudet.edu

A while ago I told you about the digitised series of the American journal for the deaf, The Silent Worker, which had such fascinating material on the relationship of the deaf community to silent cinema. The journal has been digitised by Gallaudet University, Washington, which specialises in education for deaf and hard-of-hearing students. The remarkable range of work it does includes a commitment to film, which leads us to the excellent Gallaudet University Video Library.

This is a model database with video streams in Windows Media and QuickTime, and first-rate associated metadata. And among the many titles available on the site are silent films, including – astonishingly – the first surviving film using American Sign Language, from 1910, and nine titles from 1913 made for the National Associaition of the Deaf. The films are known about by historians of deafness, but has anyone written about these from the film history angle?

Gallaudet provides this cataloguing data for the films:

The Lorna Doone Country of Devonshire England
(12 min., B & W, silent, signed 1910)
The earliest surviving film in sign language. Dr. Edward Miner Gallaudet, prominent educator of the deaf and founder of Gallaudet University, lectures on his visit to England. [The Video Library gives the date of 1913, but this seems to be an error]

An Address at the Tomb of Garfield
(6 min., B & W, silent, signed: 1913)
Willis Hubbard leads a delegation of deaf persons who have come to Washington for a memorial service at the tomb of the late President James A. Garfield. Hubbard summarizes Garfield’s life and achievements and speaks on Garfield’s deep interest in Gallaudet University (then called the Columbia Institution) and his role in defending the fledgling college against Congressional opponents and budget-cutters.

Discovery of Chloroform
(8 min. B&W, silent, signed: 1913)
Dr. George T. Dougherty, a leading chemist in the industrial world and leader among the deaf, lectures on the chloroform in one of the world’s first educational films.

A Lay Sermon
(16 min., B& W, silent, signed: 1913)
A sermon by the Rev. Robert McGregor about the universal brotherhood of man and the Fatherhood of God.

A Plea for a Statue of De l’Epee in America
(6 min., B&W, silent, signed: 1913)
An address read by Rev. McCarthy and interpreted in sign language by Dr. James H. Cloud. The Abbe de’l Epee was a French cleric who invented the French (and indirectly, the American) sign language in the late 1700’s.

The Preservation of Sign Language
(16 min., B & W, silent, signed: 1913)
An address by George William Veditz in which he deplores the debasing of the “pure” sign language and urges its preservation.

The films are mostly lectures in sign language form, so comprehension is going to be a bit limited for those not conversant with ASL, but I recommend the performance by Mary Williamson of the death of Minnehaha from Longfellow’s Hiawatha and the lecture on chloroform. They are well produced (the titles are later additions) – the person behind most of them was George Veditz, president of the National Association of the Deaf, and there’s an account of their production on the PBS site. In part it seems they were made to help preserve the art of sign language by demonstrating the work of its finest practitioners (Veditz appears on one dedicated to just this theme).

To view the films, go to the Video Library site, click on the public access link at the bottom of the page, then from the menu on the left choose ‘Deaf History’ [Update: the web page has changed, so Deaf History now appears on the main menu straight away]. There are other films extant not included here, but there is more than enough to provide a fascinating window on this world, and to show us once again that the early cinema was such an exciting and creative time. More, much more, was going on that the history books have yet been able to tell us.

There’s a history of deaf people and cinema, John S. Schuchman’s Hollywood Speaks: Deafness and the Film Entertainment Industry. My copy’s on order.