Vladimir Roudenko as the young Napoléon

Back in November 2010 the silent film historian and restorer Kevin Brownlow was deservedly given an honorary Academy Award. He received his award at the Academy of Motion Picture Arts & Sciences’ annual Governors Awards ceremony alongside two other noteworthy film figures, Francies Ford Coppola and Eli Wallach (Jean-Luc Godard was also given an honorary Award, but naturally he declined to turn up).

One imagines that the conversation between Brownlow and Coppola turned toward Napoléon, the epic 1927 film by Abel Gance which Brownlow had dedicated his life towards restoring, and which Coppola had presented in the USA back in 1981 in a re-edited restoration with a score by his father, Carmine Coppola. Perhaps while clutching their statuettes they decided that the time had come to end the block on any screening of the film in the States that did not feature the Coppola score, which for thirty years had prevented American film enthusiasts from seeing the film in form in which Brownlow had restored – and was continuing to restore, since the film had grown longer in the intervening years, had had its colour tinting and toning restored, and of course came with Carl Davis’ famous (and ever-expanding) score. It was time for Napoléon to return to America.

The real Napoléon helped build America, of course. When he was planning to invade England in 1803, and in need of funds, he approached the American negotiators hoping to purchase New Orleans for $10M (this at a time when large parts of North America was still owned by the French) and instead offered them the whole of Louisiana for $15M. It was one of the biggest land bargains in history, and helped make the United States become what it is today. And Napoléon failed to invade England.

Maybe Abel Gance would have got round to including the Louisiana Purchase as part of the six films he dreamed of making about Napoléon. He would certainly have been reluctant to leave out any detail of the Emperor’s life if it revealed the mark that he had made upon history. Gance’s astonishing, preposterous ambition was indeed to make six lengthy films documenting the life of the Emperor, a project he began in 1925. Of course he did not have the financing in place for six films, not even for one at first, but after his original financiers failed him Gance found from a Russian, Jacques Grinieff, sufficient to complete film number one, which took Napoléon from childhood, through the French revolution, to his invasion of Italy.

The nine-image pillow fight from Napoléon, from the Smithsonian’s Reel Culture blog

The film, full title Napoléon Vu par Abel Gance, premiered at the Paris Opéra on 7 April 1927. It ran for three-and-a-half hours, with a score by Arthur Honegger; later a six-and-a-half-hour version was screened, though Gance’s original cut is said to have been nine hours. A film at such a length would always have struggled to find screenings, and the film was cut down into a variety of shorter, increasingly incomprehensible versions. Its commercial fate, and the arrival of sound, condemned Gance’s six-film dreams to dust (though his script for part six, Napoléon in exile on St Helena, was filmed in 1929 by Lupu Pick in Germany as Napoléon auf St Helena).

Time moves on, and in 1955 a 76-year-old Abel Gance turned up at the British Film Institute in London. Happily the distinguished elderly filmmaker was recognised, but then Deputy Curator Liam O’Leary did an extraordinary thing. He called for a 17-year-old boy to meet M. Gance (his mother had to telephone him at school when he was in the middle of an exam), since he was known to be an enthusiast for the man’s work. It’s hard to imagine such an occurence today, but back in 1955 that was how Kevin Brownlow first met Abel Gance, and it set in train a mission by the young man to restore Napoléon (which he’d first encountered on 9.5mm when aged 15) and with it the reputation of a by then forgotten master of the silent cinema. (The Ann Harding’s Treasures blog has an interview with Brownlow where he recalls the anecdote). 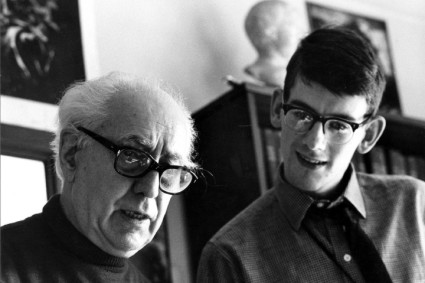 The history of Napoléon’s restoration has been amply documented, not least by Kevin Brownlow himself in his book Napoleon. The restoration premiered in 1979 at the Telluride Film Festival, Colorado, with Gance in attendance (he died in 1981, aged 92). It was in 1980, with funding from Thames Television in the UK, that Napoléon made it full impact, when it was presented in London, at four hours and 50 minutes in length and with a score by Carl Davis. Its effect on audiences was cataclymsic (I was a little too young to be aware of all this, and only caught up with Napoléon on television a few years later). The film was a bravura advertisement for all that the camera could do. With its rapid editing, hand-held (and horse-back held) camera shots, super-impositions on a phantasmagoric scale, camera effects adopted from the avant garde, startling camera angles, above all its multiple screen effects (at one point – a pillow fight – the screen divides into nine separate, interelated images), culminating in the overpowering Polyvision triple-screen effect at the end of the film as Napoléon leads his army into Italy, it was one of the most powerful demonstrations of cinematic imagination that many in the audience had seen. It was as revolutionary in theme (it covers the French revolution, of course) as it was in technique, so that the two became as one. It did not only restore Napoléon and the reputation of Abel Gance; to a considerable extent it helped restore the silent film as an art form. We were all made to see what Kevin Brownlow had always believed.

Time moves on again, and screenings of Napoléon have become increasingly rare, owing as much to the compleixites of rights issues as the expense of putting on a film, at such a length, with full orchestra, and requiring an 85-foot-wide screen for the climax. A generation or more of silent film fans has grown up without having seen Napoléon, save for a rather lame VHS and DVD version with the Carmine Coppola score which lessened Gance’s reputation rather than enhanced it. In 2000 Brownlow unveiled the film’s colour tinting and toning for the first time at a UK screening at the Royal Festival Hall. It was now a shade over five-and-a-half hours long. It was last screened in the UK in 2004.

Building the support system for the screening at the Paramount Theatre, Oakland, from http://www.mercuynews.com

And so to 2012, and the long-running and sometimes bitter battle which had kept the full Napoléon from American screens came to an end with the film’s screening at the 3,000-seat Paramount Theatre, Oakland, San Francisco on 24 and 25 March (with further screenings scheduled for 31 March and 1 April). The film is five-and-a-half long (at 20fps), calling for lunch and two refreshment breaks along the way. Carl Davis conducted the 46-piece Oakland East Bay Symphony orchestra. The whole thing has cost some $700,000 to put on – and they’re probably going to lose money on it (the screenings have not been complete sell-outs…)

The reactions have begun with ecstatic, and then worked their way up from that. There are vivid reviews by Kenneth Turan in the Los Angeles Times and by Mick LaSalle for the San Francisco Chronicle. Manohla Dargis in the New York Times gives a good account of the film’s and the film restoration’s histories. The San Francisco Silent Film Festival, hosts for the screenings, provides a handy set of FAQs (from which we learn that there is not to be a DVD or Blu-Ray release – not until someone invents Polyvision TV screens, it would seem). MercuryNews.com has a photo slideshow of preparations for the screening at the Paramount Theatre. The Mubi Notebook has helpfully collected together and summarised the main web celebrations of the film’s screenings. And Carl Davis has provided a diary of his experiences on his website.

Napoléon is more than a restoration, indeed it is more of a re-creation, an attempt by Brownlow to build ever closer to that original conception of the film, to re-enter the mind of Abel Gance. There have been so many versions of the film (Gance tinkered with his film for years, much as Brownlow would then do), it would be hard to point to any one that would be definitive. Is the longest version the best? Of course not – at least, not necessarily so – but that doesn’t seem to be the point. It is the quest that matters, quite as much as whatever stage the film may have reached at its successive screenings. The auteur was once Abel Gance; now the auteur is Kevin Brownlow.

It is rumoured that Napoléon may now be coming to the Royal Festival Hall in London in November 2013. Perhaps it will be longer still (a further restoration is rumoured). Perhaps some have started queuing already. It has been twelve years since I last saw the film, and I have to admit that at the time I was impressed, but not overwhelmed. I found the film to be a technical showcase with plenty of felicities but without much real insight, and with an indifferent central performance from Albért Dieudonné (the boy Napoléon is played by Vladimir Roudenko, who is much better). Style alone is not greatness, though it may be great to watch. I hope I get the chance to see the film once more and to find myself proven wrong. I hope everyone gets a chance to see it.