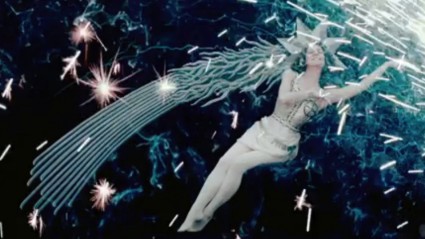 Frame grab from the trailer for Martin Scorsese’s Hugo

Some weeks we’re not sure what to put in the Bioscope newsreel, and some weeks we’re just overwhelmed with how alive our dead medium continues to be. And that’s when we’ve set aside the news, already reported, of the first appearance on American screens of the full restored Napoléon with Carl Davis score, next year. So, after a gap of a few weeks while we were away on our travels, here’s some of the news in silent films now.

Hugo trailer
Martin Scorsese, as you may know, is making a film of Brian Selznick’s children’s novel, The Invention of Hugh Cabret, in which Georges Méliès is a central character. During production the film has been known as Hugo Cabret, but clearly that was too much for Disney’s marketing people, and now it’s just known as Hugo. The first trailer is out, and – guess what – it looks like a Disney children’s film. But some enticing recreations of Georges Méliès’ film and stage productions, as the image above shows, should draw us in to see when the time comes. Read more.

Silent film scores galore
An extraordinary treasure trove of silent film scores has been unearthed by Birmingham city council (in the UK) in its music library. There are around 500 scores in a collection which has lain in a basement for decades. Chiefly examples of generic scores for stock scenes (chases, mystery scenes, people in peril etc.), many are scores for small orchestras of between seven and eleven players. They appear to have been collected by touring musical directors, who went from cinema to cinema rather than work for just the one venue. We will have more on this amazing discovery and its importance for silent film history in due course. Read more.

Theodore Roszak RIP
The social critic, academic and novelist Theodore Roszak has died. Best known for coining the phrase ‘counter culture’ in his 1968 work The Making of a Counter Culture, he was also an ardent film fan and wrote one of the best of all film-themed novels, Flicker, a dark and imaginatively far-fetched work which revolves around the mysterious figure of Max Castle, B-movie horror film maker in the 1940s and reveals an extraordinary alternate history of Hollywood from the silent period onwards. Read more.

San Francisco silents
The San Francisco Silent Film Festival is running as we type. Highlights include a solo electric guitar acompaniment by Giovanni Spinelli to Sunrise: A Story of Two Humans (there’s an extract from a documentary on the scoring of the film here), He Who Gets Slapped, I Was Born But…, Marlene Dietrich in The Woman Men Yearn For, and the ubiquitous The Great White Silence. Read more.

Paintings of cinemas
One of the blogs the Bioscope likes to read when it feels the need to stir the brain cells a bit is Nick Redfern’s thought-provoking Research into Film. Normally his subject is analytical studies of films, but he has put up a delightful post exhibiting paintings of cinemas and their audiences by contemporary artists. Do take a look. Read more.