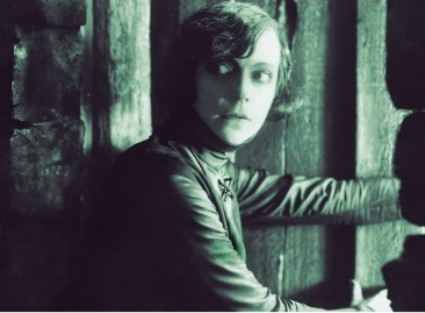 The second notable Edition Filmmuseum DVD release to tell you about is Hamlet & Die Filmprimadonna, to be issued on 10 June 2011. It was 2009 when the DVD label first announced that a DVD of Asta Nielsen’s Hamlet (1920), from the coloured print discovered in 2005, was forthcoming. Whether it was licensing issues, or technical matters that held up the release I don’t know, and it doesn’t matter – all that matters is that such a key film, from a fine restored print, and with a highly commendable score, is available on DVD at last. It certainly ought to have an impact.

The Danish actress Asta Nielsen was probably the leading European film performer of the 1910s. Though her dark demeanour and unconventional beauty probably led to a lack of success in the USA, in European countries, especially Germany, she was revered, with films such as Afgrunden (The Abyss) (1910), Balletdanserinden (1911), Die Suffragette (1913) being among the most iconic and forward-looking of their age. She and husband/director Urban Gad moved to Germany in 1911 and it was in that country, after she had established the Art-Film company, that Nielsen (now parted from Gad) embarked a radical film interpretation of Hamlet. Possibly by this time Nielsen’s star was a little on the wane, but her taste for the bold and challenging was undimmed.

It was a bold enough decision to film Shakespeare, whose plays had lost favour with cinema audiences and producers once feature films had come in. But Nielsen and her directors Sven Gade and Heinz Schall went further. Though the essential structure of the film was taken from Shakespeare’s play, they went back to Shakespeare’s source material, in particular Saxo Grammaticus, to rid the play of its Renaissance trappings. And then they went further by making Hamlet a woman. The scriptwriter Erin Gepard apparently found justification for this in a obscure work of Shakespearean criticism, The Mystery of Hamlet (1881), by one Edward P. Vining. Vining’s earnest expressed thesis was that the deep-rooted mysteries lying at the hear of the play and particularly the character of Hamlet could be readily explained if you understood that Hamlet was a woman, forced to disguise her sex for political expediency, with the added complication of being in love with Horatio.

Here is some of Vining’s argument:

There is not only a masculine type of human perfection, but also a feminine type; and when it became evident that Hamlet was born lacking in many of the elements of virility, there grew up in him, as compensation, many of the perfections of character more properly the crown of the better half of the human race. All mankind has recognized the deep humanity of the melancholy prince, and many have been puzzled to find that they were instinctively compelled to bow before him in admiration, while still finding in him so many faults and weaknesses. The depths of human nature which Shakespeare touched in him have been felt by all, but it has scarcely been recognized that the charms of Hamlet’s mind are essentially feminine in their nature.

One has only to argue that Hamlet could have his feminine side and yet remain a prince to put Vining’s arguments in their place, but it is true that there have been a number of female Hamlets on the stage from the 18th century onwards. Among the stage performers who were not content to be confined to playing Ophelia have been Sarah Siddons in the 18th century, Charlotte Crampton, Clare Howard, Alice Marriott and Alma Murray in the 19th, and in more recent times Frances de la Tour and Angela Winkler. The evidence of such performers suggests both something particularly feminine in the character of Hamlet, but also a desire to lay claim to an iconically male role.

Perhaps the most notable female stage Hamlet also became the first film Hamlet when Sarah Bernhardt was filmed in 1900 in the duel scene from Hamlet. Not only was it the first film Hamlet but it was the first Shakespeare sound film, as it was made for the Phono-Cinéma-Théâtre, with the film synchronised to a phonograph recording. Female screen Hamlets post-Nielsen have been rare, though the Turkish actress Fatam Girik was the star of İntikam Meleği (1977), English title the helpfully literal Female Hamlet. It is perhaps because it is so often such a struggle just to get Shakespeare filmed that few producers or performers have felt any need to takes things further and explore such gender reversal. Opportunities on the stage have been that much greater in number, as Tony Howard documents in his excellent Women as Hamlet: Performance and Interpretation in Theatre, Film and Fiction.

Nielsen’s interpretation was therefore part of a clear (if marginal) stage tradition, but was something of a bolt out of the blue for film. There was nothing really to compare it to in 1921, and little since – it is a film that stands on its own. It is Nielsen’s great accomplishment that we immediately accept her as Hamlet. Her androgynous looks help to a degree, but crucially she is not trying to be a man playing Hamlet (as Bernhardt and her predecssors had done) – she plays a woman who must disguise herself as a man. There is no questioning of the rightness of the idea when we watch the film, and little sense of any forcing of the narrative to fit the thesis. It works on its own terms. It has its absurdities, inevitably, particularly when Horatio discovers that the dying Hamlet has been a woman all along, but that may simply be a fault of our modern eyes. Technically the film is no masterpiece. It is plainly directed, somewhat meanly produced, and not memorably performed aside from Nielsen. But it does succeed as a consistently imagined world, where people live, work, rule and affairs of state take place. As I wrote previously here about seeing the film in 2007, “there is a keen sense of palace life going on while the central figures progressively, and madly, destroy one another”. Moreover, there is no sense at all of something translated from stage to screen. The best Shakespearean cinema is invariably where cinema comes first.

The Edition Filmmuseum DVD derives from the colour version (i.e. tinted and toned) discovered in 2005 and restored by the Deutsches Filminstitut. It comes with a new score by Michael Riessler which I found especially haunting and appropriate when I heard it in 2007. The release is a two-DVD set. Disc 1 is the film (110 mins). Disc 2 has Die Filmprimadonna (1913), starring Nielsen and directed by Urban Gad; Nielsen home movies, films on the restoration process and a short entitled Der elektronische Hamlet 2007 (2008).