Two posts are coming up on two important DVD releases from that excellent label Edition Filmmuseum. Post number one is on an innovative two-DVD set of magic lantern slides and early films, Screening the Poor 1888-1914.

Cinema was the ‘poor man’s theatre’ (to use a common phrase of the time); it also spoke to and documented the lives of the poor. In doing so it built on a tradition of social concern filtered through visual entertainment that had its roots in the magic lantern. In church halls, schools and missions throughout the late Victorian period, audiences were presented with sentimental but often heart-rending tales of the hardship suffered by those at the lowest rung on the ladder. The showmen, lecturers and propagandists who put on such lantern shows swiftly adopted the cinematograph as an additional weapon in their armoury, with early projectors often capable of presenting both film and slides. This multimedia nature of early ‘cinema’ shows is well-known, but is seldom reflected in modern-day exhibition of early film, still less in DVD releases. And that is what makes Screening the Poor so unusual – it brings together the lantern and the cinematograph on DVD in a conscious echo of the programmes of the late 1890s/early 1900s. The blurb for the DVD explains this further:

Around 1900, the issues of poverty and poor relief were the source of heated controversy. This DVD illustrates in seven chapters how examinations of the ‘Social Question’ were presented in magic lantern slide sets and early films. On the screens of auditoriums, Sunday schools, music-halls, cinemas and churches, visitors could witness orphans freezing to death in the snow, drunkards plunging their families into misery and helpless old people begging for a scrap of bread. Audiences experienced poignant moving pictures in performances with music, singing and recitations. The
photographic and film industries delivered glass slide sets and films in very large runs on a variety of themes relating to poverty.

This DVD recalls the forgotten art of projection and presents it anew on the modern electronic screen: drawing on original images and using authentic projection equipment, Ensemble illuminago shows enchanting Victorian slide shows and films in a live musical performance at the Munich Film Museum. Digital slideshows reconstruct the interaction between slide sets und text recitals, and early silent films are accompanied with music as they were a century ago: piano and violin underscore the moods that find visual expression in the films.

Nowadays it is rather unusual to find both films and slide sets presented on one DVD. Around 1900 it was common knowledge that the “moving pictures” in a film had evolved from photographic slide sets. Showmen, touring lecturers, music-hall entrepreneurs and cinema operators often used both projection media alternately in their live shows.

It is also unusual to compile DVDs thematically, according to social themes, rather than in a form that reflects pure film history (such as the output of a studio, director or actor). So this is a curated DVD, and the words below are from the DVD booklet, written by Martin Loiperdinger and Ludwig Vogl-Bienek. Whether an item is a film or a set of magic lantern slides is identified at the start of each description. Often the same subject from the same literary source (particularly the poems of George R. Sims, a once highly popular and influential documenter of the lives of London’s poor) cross from lantern to cinematograph. So, if you have tears, prepare to shed them now …

DVD 1
Slumming
Charitable organisations and dedicated journalists decried the misery of the slums in industrial cities. ‘Slumming’ was the term used to describe tourist outings or philanthropic day-trips to witness the poverty. Those who eschewed direct confrontation could visit magic lantern shows or the cinema: the photographic and film industries provided a constant supply of new material covering diverse issues of the ‘Social Question’.

Children in Misery
The huge number of poor children was a central issue of the ‘Social Question’. They were not to blame for their wretched situation – and their need of help was obvious. Nonetheless, they were often suspected of being petty criminals. Slide shows and film screenings, however, usually presented impoverished children to their audiences as needy creatures deserving of help and affection.

Child Labour
Impoverished children were made to work as street peddlers, shoe-shines, and messengers to help support their families. The labour unions, social reformers and charitable organisations were particularly critical of the perilous conditions faced by child labourers in factories.

Charity and Social Care
Controversies concerning the justification, necessity and limits of aid surrounded the public discussion on the ‘Social Question’ from the beginning: able-bodied poor people of working age were generally suspected of being themselves to blame for their poverty due to negligence, idleness, or alcoholism, or even of deviously abusing
the benevolence shown to them. Slide sets and early films on the issue of poor relief addressed such prejudices – and also made fun of over-enthusiastic benefactors. 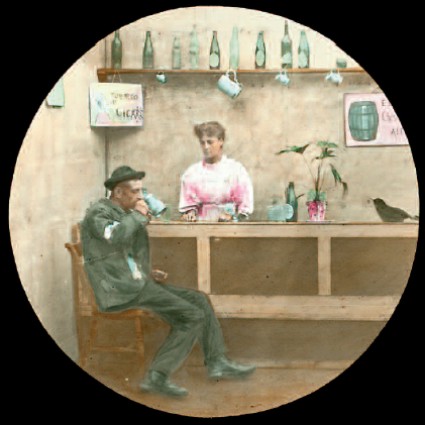 Enter not the Dram Shop

DVD2
Drink and Temperance Movement
Alcoholism was often blamed as the cause of poverty. However, many social reformers emphasised that it was instead a consequence of poverty. In their war against the ‘demon alcohol’, the Temperance Movement relied on the persuasive power of projected images. Tales of drunken fathers who drove their families to ruin were part of the standard repertoire in early cinema and magic lantern shows. 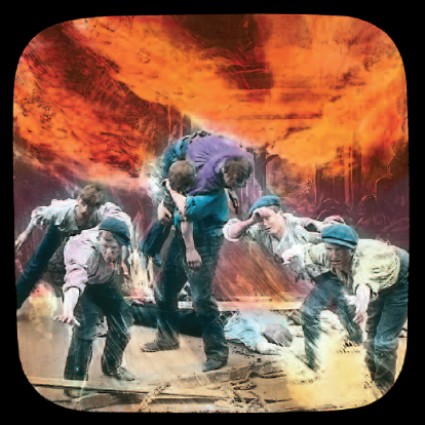 Don’t go down the mine, Dad

Perils of Wage Labour
Poor people who were able to work received no support. The working classes were forced to take on poorly-paid and dangerous jobs in order to survive. Mining accidents spread fear and terror among mining communities. Sensational special effects on the screen, such as firedamp explosions, helped reinforce demands by the labour unions and charitable organisations for safer working conditions and improved support for surviving dependants.

Escape
Magic Lantern shows and early films about the ‘Social Question’ rarely tell of a successful escape from poverty, and the elimination of poverty is not an issue. The flood of emigrants was addressed by slide sets used by charitable organisations to prepare the migrants for an uncertain future. However, other means of escape from poverty were at hand: salvation in the afterlife or in the world of fantasy.

This is an excellent compilation, which illuminates the visual media of the late 19th/early 20th centuries and illuminates what concerned society and how it chose to express that concern. Like the best of the magic lantern and cinematograph shows, it imparts a strong impression upon the mind, teaching us of the sorrows of an age not so far away. I hope the DVD finds its way to new audiences.