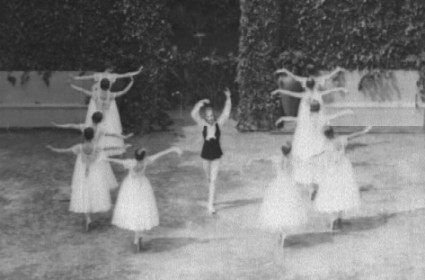 The Ballet Russes at the Fêtes de Narcisses, Montreux in 1928, from British Pathé

Can we make the Bioscope Newsreel a weekly occurrence, say every Friday? We’ll have a go.

Ballet Russes on film
Jane Pritchard, co-curator of the Victorian & Albert Museum’s recent exhibition ‘Diaghilev and the Golden Age of the Ballets Russes, 1909-1929’ writes of the amazing discovery of the first known film of the Ballet Russes lurking in the British Pathé archive. Read more.

Modern elephant taxidermy
Rich Remsberg unearths an extraordinary 1927 film from the American Museum of Natural History that shows you how to stuff an elephant. The taxidermist in question is the multi-talented Carl Akeley, also famed as a motion picture cameraman and inventor – the Akeley camera, with its gyroscopic head, was much used by wildlife filmmakers and newsreels. Read more.

Music for silents
An interesting interview with Ken Winokur of renowned silent film accompanists the Alloy Orchestra raises the issue of venues which insist on showing silent films silently, because André Bazin pronounced that any music accompaniment was mere nostalgia. Go to the Cinémathèque Française to watch your silents to the accompaniment of coughs and the occasional rumbling stomach, and I think most will vote for ‘nostalgia’. Read more.

Farewell to the Silent Movie Blog
For the past couple of years Christopher Snowden’s Silent Movie Blog has provided witty, well-researched and strikingly illustrated accounts of American silent film history. Sadly it is being closed down, and it is not clear whether the archive will remain online (all posts before July 2010 have been removed already). Read more.

And finally
The Bioscope is four years old today. Here’s the link to post number one – a single pithy sentence.