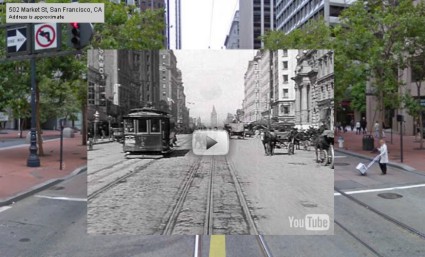 My acknowledgments go to the excellent ReadWriteWeb for a piece on websites that mash-up mapping, photos, street views, video and documentary photographs from the past. Among the interesting projects the piece describes where uses can map historical photographs to maps using geo-tags is There and Then, a site created by Kier Clarke which takes historical videos from YouTube and overlays them on a Google Street View of the location today.

There’s not a huge number on the site as yet, but among the examples are a number of the BFI’s Friese-Greene colour travel films from the 1920s mapped to their present day British locations, and some American examples of the Library of Congress, including a 1905 film A Trip Down Market Street Before the Fire, illustrated above (though I don’t think it’s from the LoC copy – note the rolling frame line). The effect is a little odd for this particular example, because the Google image is static while the 1905 film is a travelling shot, but in general it’s a delightful conceit.

It’s not a new idea, however. British film artist Patrick Keiller installed a piece at the BFI Southbank in 2007 which inset archive films within modern-day photographs of the same location, as reported in this Bioscope post.

I also recall an exhibition at Brighton museum a while back which showed moving images rom Brighton past and present taken from the same position exhibited next door to one another. The results are invariably haunting and thought-provoking, and it would be good to see a lot more of this sort of imaginative juxtaposition of yesterday and today.

The Market Street example was picked for Bioscope regular Joe Thompson, San Francisco resident and cable car enthusiast, whose own fascinating blog piece on A Trip Down Market Street Before the Fire was reported on by the Bioscope here.