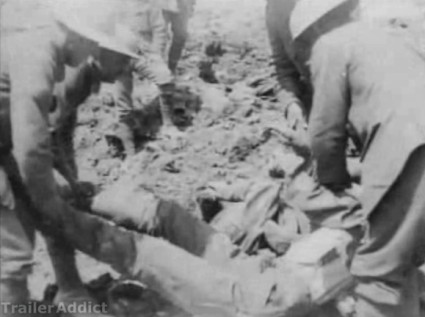 How I Filmed the War – trailer available from traileraddict.com

Has anyone come across a modern silent documentary? I suppose you could point to Godrey Reggio’s wordless Koyaanisqatsi (1982) and its successors, with their Philip Glass scores, but I’ve not come across an example of a documentary from today which emulates the style of documentaries from the silent era. Until now.

How I Filmed the War is a documentary by Yuval Sagiv, a graduate student of Toronto’s York University (the film is his thesis production). It received its premiere last week at Canada’s Hot Docs festival of documentary film. Its subject is Geoffrey Malins, the British cameraman who (with J.B. McDowell) filmed the 1916 documentary The Battle of the Somme, a feature-length account of the conflict from the British point of view produced by the British Topical Committee for War Films, a British film trade organisation formed with War Office support.

Malins went on to gain greater fame than his co-filmmaker because he wrote an account of his experiences, entitled How I Filmed the War (1920), which is something of a vainglorious work (and mentions McDowell not at all), but is nevertheless a lively and informative record that provides us with one of the best written records that we have of filming in the First World War.

Yuval Sagiv’s film adopts the title of Malins’ book and over 75 minutes analyses text and film in the form of a silent documentary, as the Hot Docs blurb explains:

One the most successful films ever made, The Battle of the Somme, shot and edited by Geoffrey H. Malins during the First World War, is brilliantly decoded in this riveting experimental doc that unravels fascinating secrets and manipulations. A compelling contemplation of the ownership of history plays out on intertitles taken from excerpts of Malins’s controversial autobiography juxtaposed with conflicting historical accounts and emotionally devastating clips from the original film. Dispatched to the front as Britain’s “Official Kinematographer,” Malins filmed from the muddy trenches to capture the valour and horror of “the big push” on July 1, 1916—a day that has become synonymous with the futility of war. The British alone suffered 58,000 casualties by nightfall. The rising tension in this fascinating deconstruction of propaganda, illusion, and “truth” in documentary is underscored by a haunting electro-ambient soundscape.

The Battle of the Somme itself is indeed arguably one of the most successful films ever made, at least in the UK – historian Nicholas Hiley (to whom thanks are due for alerting me to the new film) has calculated that the film was seen by some 20 million people, or half the population of the UK at that time, a degree of social impact for a screen entertainment that would go unmatched until the rise of television. It will be really interesting to see how How I Filmed the War tackles its tremendous subject – the trailer suggests a compelling interplay between original footage and words carefully selected from Malins’ book (with their original typeface and page number) to set up a stimulating counter-narrative. There’s an interesting review at Toronto Film Scene which describes a subtle, challenging work once one has got over the unusual technique and minimalist style. I hope that it makes it to a few other festivals.