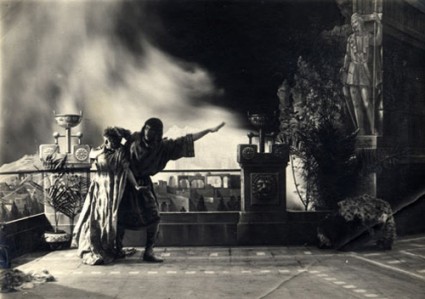 We have reported previously on the screenings of early films under the title of The Ancient World in Silent Cinema which have taken place in the UK – one programme covering Ancient Greece and Rome and a second programme covering the Biblical lands. The screenings are part of a project on the ancient world and cinema organised by Professor Maria Wyke (University College London) and Pantelis Michelakis (University of Bristol).

The screenings have now moved to America. On 10 April 2010, the Getty Villa, Malibu, California will host a programme of Ancient Rome and Greece films, from the collection of the BFI National Archive. Here’s the blurb describing the programme:

In the earliest days of cinema, more than 800 films drew their inspiration from ancient Mediterranean cultures, history, and society. With the exception of a handful now available on DVD or screened at film festivals, most of these works have been largely forgotten. Ranging from historical and mythological epics to burlesques, animated cartoons, documentaries and adaptations of Greek drama, these films all suggest an interest in the ancient world. Today more than 300 of these early films survive in archival collections in 26 countries, and digital technology has created new possibilities to access and transmit early cinema, allowing a reconsideration of silent films as a culturally and aesthetically dynamic medium.

The films will be on 35mm, and will be acompanied by pianist Andrew Earle Simpson, composer and professor of music at the Catholic University of America in Washington, D.C. The films to be shown are:

The programme is shorter than was the case in the UK, where we were treated to an afternoon and evening set of screenings, but I warmly recommend what is certain to be an engrossing programme. I particularly recommend Pastrone’s La Caduta di Troia, a stand-out work by a real filmmaker. Certainly the Ancient Greeks would have recognised its narrative fervour and its respect for heroic ideals.

The aim of the project (which doesn’t have a web page or website, unfortunately) is to investigate in detail a broad range of silent films set in antiquity leading to an online database, conferences and publications and – it is confidently expressed – preservation, digitisation, and exhibition. We will be keeping an eye on developments.