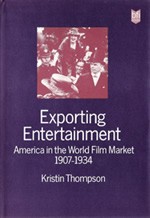 Scholarly works in the silent cinema field – indeed in most fields – don’t last long. They catch the latest academic wave for a time, surf along for a while, then sink beneath the waves as the next key text comes along. For a while it is important to cite them in your own work; then it ceases to be a necessity; finally it becomes an embarassment. You are writing an essay in 2010 and you are citing a book published in 1985? Think again.

But then just a handful of books break through academic fashion and turn out to have lasting value. You have always to refer back to them, because they are one of the signposts. They point the way. In the silent (and early sound) cinema field, one such book is Kristin Thompson’s Exporting Entertainment: America in the World Film Market 1907-1934, published in 1985 and a book that I have referred back to time and time again ever since, and one which has had a strong influence on our corner of film studies.

In part that influence is due to the unusual nature of its theme. Its subject is mechanics of the early Hollywood film industry and how it gained world dominance from the First World War inwards. But it is not so much the thesis as the method, as Thompson looks at such previously overlooked data as import and export records, industrial data and market reports – data which had scarcely been considered the stuff of film history before then, but which turned out to be essential in understanding the intracacies of production, distribution and exhibition on a worldwide scale. The information could then underpin an understanding of why, as the book’s blurb puts it, “Hollywood has become practically synonymous with cinema”.

Exporting Entertainment has inspired other works, notably Ruth Vasey’s The World According to Hollywood: 1918–1939 (1997) and Andrew Higson and Richard Maltby’s Film Europe and Film America: Cinema, Commerce and Cultural Exchange, 1920–39 (1999). It was also pioneering in its emphasis on empirical data, a trend which has been picked up in recent years by exhibition studies. Some of its arguments may have been superseded by economist Gerben Bakker’s recent Entertainment Industrialised: The Emergence of the International Film Industry, 1890-1940 (discussed in detail in an earlier post), but those steeped in film history will find Thompson’s book easier to navigate, even if it is not a light read that you are going to polish off in one sitting. But it should be read, because it sees the industry not through the starry eyes of the fan journals of the period but through the hard-bitten minds of the trade papers, who saw things in so many pounds or dollars per foot of film. The detail is amazing (as is the research behind it), and you really do see cinema on a global scale (Panama, Peru, Siam, the Malay States, Romania and Estonia all end up in the subject index). The book makes you recognise why national cinema is such a suspect way of going about investigating film history when the business was so deeply bound up by the ebbs and flows of a world market.

The reasons for all this now is to announce the happy news that Exporting Entertainment is now freely available online from David Bordwell and Kristin Thompson’s website. As Thompson explains in her useful introduction on the book’s web page, the book has been long out of print and was never distributed in the United States (it was published by the BFI). The book has been made available in PDF form, though be warned that it is a simple scanning job and consequently the file size is large (87MB) and there is no underlying OCR so the text is not word-searchable. This is a shame, and one wonders whether Thompson might take advice from those who regularly produce e-books and re-issue the text in word-searchable format. It would certainly open up the text anew for researchers. But setting that petty point aside, this is a very welcome means of re-introducing an important but rare text to the research community, and it has gone into the Bioscope Library.