One of the interesting trends to follow for 2010 in our field will be the appearance of silents on Blu-Ray. Following the curiosity of a 1923 short, The Story of Petroleum, turning up as an extra on the Blu-Ray release of There Will Be Blood as the first silent to be released in high definition, there are currently these silents available or announced. 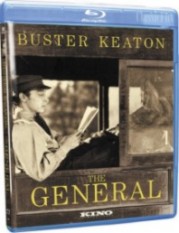 Buster Keaton’s The General (1927) has been issued in the USA on Region 1 by Kino Video. Mastered in HD at 1080p from a 35mm print struck from the original negative, the release comes with three music scores to choose from – Carl Davis’ 1987 Thames Silents orchestral score (in DTS-HD Master Audio 5.1 or uncompressed 2.0 stereo), a 1995 score arranged and directed by Robert Israel, and a theatre organ score by Lee Erwin. Extras include a video tour of the real General, presented in association with The Southern Museum; a tour of the filming locations, presented by John Bengtson, author of Silent Echoes; behind-the-scenes home movie footage; filmed introductions by Gloria Swanson and Orson Welles; and ‘The Buster Express’ a montage of train gags from throughout Keaton’s career. The release has received high praise, and there’s an illuminating interview with Kino’s Bret Wood on the challenges of coverting a silent to Blu-Ray on the DoBlu review site. Remastering films of such vintage for high definition is no easy task:

Preparing silent films for Blu-ray is proving to be a daunting challenge. Even when we are able to locate the best surviving film elements of a particular title, these elements have considerably more grain and printed-in wear than one finds in a studio-preserved negative that is, say, twenty years old.

When a film is mastered in HD, the image is sharper than it has previously been, but as a consequence the film grain becomes more pronounced. When we first transferred The General, a minimal amount of digital grain reduction was applied and it is this version that was released on DVD. Upon close inspection of the Blu-ray test discs, we found that even that small amount of digital noise reduction had created visual artifacting, a slight blurring and ghosting of the image. We brought the film element back to the lab (Crawford Communications) and re-transferred it specifically for Blu-ray, without DRS or any artificial grain reduction. So the film was remastered specifically for the Blu-ray release …

… The DVNR technology of the DVD era is not subtle enough for the 1080 requirements of the Blu-ray age. In fact, when I look back at some silent films that were released on DVD, heavily treated with digital noise reduction, I cringe. I now recognize the degree to which the film’s natural grain and sharpness have been glossed over for the sake of a smooth image. I worry that this has spoiled the consumer, who will now expect every film to look this way when the actual film never looked that way to begin with!

So the big question that is yet to be answered is whether or not Blu-ray users will be satisfied with an HD copy of a film that is not pristine, but looks like an 80-year-old film actually looks.

In Britain, meanwhile, first off the blocks with a region 2 Blu-Ray release has been Eureka, who have given us Sunrise (1927). The release features1080p HD transfers of two versions of the F.W. Murnau classi: the previously released Movietone version (i.e. with original synchronised music score), and an alternate silent version of the film recently discovered in the Czech Republic (with optional English subtitles). The generous array of extra includes an alternate Olympic Chamber Orchestra score in stereo (the Movietone score is mono, of course); a full-length audio commentary by ASC cinematographer John Bailey on the Movietone version; outtakes with John Bailey commentary; Murnau’s 4 Devils: Traces of a Lost Film — Janet Bergstrom’s updated 40-minute documentary about the lost Murnau film; original theatrical trailer; original ‘photoplay’ script by Carl Mayer with Murnau’s handwritten annotations (150 pages in PDF format); and a 20-page illustrated booklet with film restoration and DVD/Blu-ray transfer information, along with a comparison between the two versions.

Is there a business for the video companies in releasing silents on Blu-Ray, particularly given some of the challenges outlined by Bret Wood? The mass audience will want cleaned-up images (if it wants to see silents at all), whereas the afficionados would welcome sight of the grain. Well, some are taking up the challenge, as there are a number of titles being announced for 2010. This is what I’ve been able to trace so far:

And, just to complete the picture, there’s one modern silent also on Blu-Ray – Mel Brooks’ Silent Movie (1976), as part of The Mel Brooks Collection.