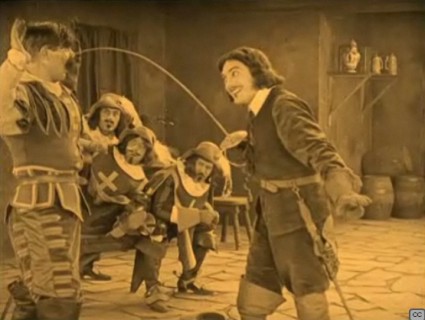 Welcome news arrives from silent film musician and composer Maud Nelissen. Europa Film Treasures, the free online library of European films put together by Lobster Films, has published the uproarious Max Linder film The Three Must-Get-Theres (1922), with a fine new score by Maud and her band The Sprockets. The film is a cheerful parody of Douglas Fairbanks’ The Three Musketeers (1921), sending up the Fairbanks persona while having with more than a little of the spirit of Alexandre Dumas itself, in between the anachronistic gags and slapstick knockabout. It looks good, and sounds terrific.

We’ve already reported on Europa Film Treasures, an extraordinary collection of fiction and non-fiction titles from across Europe (plus some from the USA), dating from 1898 to 1999, and from archives such as Deutsche Kinemathek, GosFilmoFond, Filmarchiv Austria, the Imperial War Museum Film and Video Archive, and Lobster Films itself. To quote from the earlier report, the films include

That was a year and a half ago, when there were fifty or so titles, with the promise of 500 eventually. More titles have been added since then – around forty – among which are Twee Zeeuwse Meisjses in Zandvoort (1913), a plotless comedy about two young Dutchwomen visiting the seaside, starring Annie Bos; Rijks-veeartsenijkundige hoogeschool (1918), a visit to the Royal Veterinary School of Utrecht in the Netherlands; Hesanut Builds a Skyscraper (1914), an American animation film about the building of a skyscraper; and Chamber of Forgetfulness (1912), an American drama of jealousy and photography directed by Étienne Arnaud for Eclair, starring Alec B. Francis and Barbara Tennant.

You can keep up with the additions by following the Europa Film Treasures blog, which records each new film as it goes up. Fresh material is promised, including titles by Georges Méliès. Additional features are being added to the site, including documentary resources, including an introduction the history of colour in cinema and an essay on film conservation. A debate section covers issues such as the digital projection of heritage films. The site continues to have its oddities, not least a quaint use of the English language (the site in in English, French, Italian, Spanish and German) that reads in place like they used translation software. You can either view this as having an amusing charm, or you can be disappointed that an excellent site funded out of the European MEDIA programme could not be just that little bit better in its presentation (another quibble is films given under the language title of the print rather than their original title).