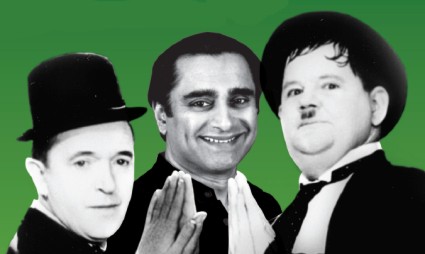 The admirable attempts by the Bristol Silents crowd to rope in British comedy celebrities to promote the silent film proceeds apace. After Paul Merton, Eric Sykes, Phill Jupitus, Tim Brooke Taylor, Graeme Garden and Neil Innes, the latest welcome volunteer is Sanjeev Bhaskar, who is to be the host of a special event, Laurel and Hardy’s Comedy Mayhem, at the Colston Hall, Bristol, 9 September 2009. Here’s the blurb:

It’s 80 years since Stan Laurel and Oliver Hardy made their transition from silent to sound film and Bristol’s Slapstick Silent Comedy Festival celebrates their extraordinary onscreen legacy with a special live gala evening of film and music hosted by writer and comedian Sanjeev Bhaskar.

Best known for his work on Goodness Gracious Me and The Kumars at No 42 Sanjeev has selected his favourite Stan and Ollie comedies to delight new audiences including their oscar winning classic THE MUSIC BOX (1932) in which the boys play removal men who are trying to deliver a piano up a monumental flight of stairs!

Other highlights include live musical performances from a capella vocal group The Matinee Idles and a special appearance from Our Gang member and child performer with Stan and Ollie – Hollywood legend Jean Darling.

All this plus the world premiere of a newly commissioned orchestral score for the Laurel and Hardy classic silent comedy DOUBLE WHOOPEE (1929) featuring Jean Harlow’s screen debut and accompanied by the from Günter Buchwald and performed by the wonderful Emerald Ensemble.

A rare opportunity to see comedy legends Laurel and Hardy on the big screen with one of Britain’s best loved comic performers.

The event is designed to help raise funds for next year’s Slapstick festival, so well worthy of your patronage if you’re anywhere in the Bristol vicinity.

Here’s news of a conference on Shakespeare and film which includes silent Shakespeare in its call for papers – though you’ll have to hurry, as the deadline is 28 August. The conference takes place at the Ohio University Inn and Conference Center, Ohio University, Athens, Ohio, USA, 22-24 October 2009:

The conference organizing committee invites abstracts (200-300 words) or papers on a range of issues in film and television productions of Shakespeare from the Silents to the Age of Branagh and Baz. Papers can focus on individual films; the work of major directors; intertextual (and visual) dialogue between Shakespeare films or between stage and film Shakespeares; television Shakespeare; spin-off films and television programs; Shakespeare in cyberspace; global Shakespeare; theories of appropriation and adaptation; editions and screenplays; funding, promotion and marketing; photography and trailers; DVD material; audience; film scores; cinematography; cultural context; film clips; and teaching strategies.

Abstracts or papers are due by June 5, 2009 (early decision) or August 28, 2009 (final deadline). All inquiries should be directed to: Samuel Crowl/Department of English/Ohio University/Athens, Ohio/45701 or via email to crowl[at]ohio.edu.

All sessions of the conference except the Thursday evening keynote lecture will be held at the Ohio University Inn located just across the Hocking River from the campus of Ohio University. Special room rates will be available for conference attendees. The Friday evening conference banquet will be included in the registration fee.