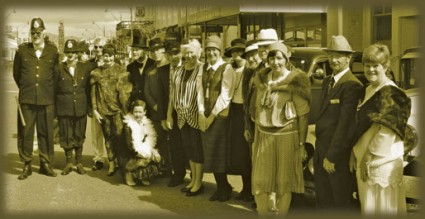 Another day, another festival. This time we’re in New Zealand, for the homely delights of the Opotiki Silent Film Festival. Organised by the Opotiki Community Arts Council, and held in Opotiki’s art deco De Luxe Theatre, the festival is noteworthy for encouraging its audiences to dress up in period costume, something that you can’t quite imagine happening in Pordenone (more’s the pity).

This year’s festival takes place 4-5 September. Financial constraints have led them to bill this year’s offering as a Mini Silent Festival, but it’s a fine programme for all that (all with live piano accompaniment):

In his first independently produced feature film Buster tells of love and romance through the Stone Age, the Roman Age, and the Modern Age.

A show-off clerk posing as a railroad executive catches a young bride and then drives her family’s finances to the brink of ruin.

* Kid Auto Races in Venice 1914 – The very first time we see Chaplin as ‘the Tramp’, hogging the camera at a real event.
* The Vagabond 1916 – An impoverished violinist falls for a beautiful gypsy girl. His love appears to be thwarted but he wins out in the end.
* The Fireman 1916 – Charlie is a fireman who always does everything wrong. Group slapstick at its very best.
* One A.M. 1916 – After a night on the town, Charlie comes home drunk and unable to find his key… A raucous one-man show.

Willie is the effete son of riverboat captain ‘Steamboat Bill’, visiting his dad after years away. Bill tries to turn his son into a man without apparent success. Bill has a dispute with a powerful banker while Willie falls for Kitty, the banker’s daughter. When a hurricane hits, Willie leaps to the rescue and saves the day.

Featuring our favourite Clara Bow. A promising student is diverted by the ‘flaming youth in rebellion’ of the twenties who danced to wild jazz and had petting parties!

An amazing selection of European and US shorts providing a fascinating insight into life before the Talkies.

* Those Awful Hats
* For Her Mother’s Day
* Folies-Bergère Fireman (features nudity!)
* Monkey Chase ~ Titanic
* The Mystery of the Leaping Fish

A thief (Douglas Fairbanks Snr) falls in love with the Caliph of Bagdad’s daughter who will give her hand to the suitor who brings back the rarest treasure. The thief embarks on a magical journey, fraught with danger…

I like those helpful headings. A bit at a loss as to what Monkey Chase ~ Titanic might be, but all in all a great line-up. Further information, including booking form, and a delightful selection of photos from past festivals, showing how much the audiences gets into the swing of things, can be found on the festival site. The site also promises that “the foyer will be decorated in style, and tea with Lamingtons or shortbread will be available at the Nibblenook”. Perfect.