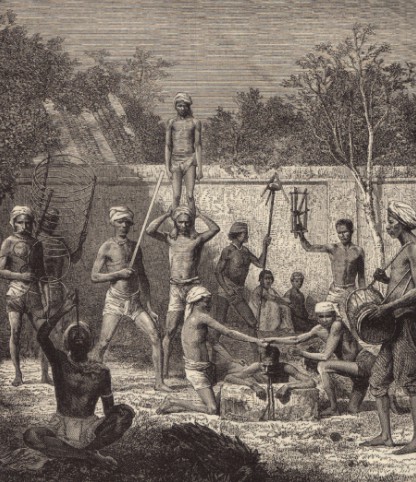 A summary of the conference’s concerns is not easy to track down, but the original call for papers said that they were interested in Imperial cinema, regional patriotic shows, circus and empire, silent film and identity, topographical empires, expedition films, the magic lantern and the empire, patriotism on the stage, sport as national identity, music hall and imperial sentiment, photography and otherness, colonial postcards, world’s fairs and ethnographic display, panoramic and dioramic empires, advertising and empire and the Boer War. Which is more than enough to fill a conference, and there’s a impressive line-up of speakers covering conquerers and the conquered.

Below is the outline programme (the full programme with abstracts of all the papers can be downloaded in PDF format here):

Jacob Smith – The Adventures of the Lion Tamer
Christina Welch – The Popular Visual Representation of North American Indian Peoples and their Lifeways at the World’s Fairs and in the Wild West Shows
Joshua Yumibe – Abyssinian Expedition and the Field of Visual Display
Theresa Scandiffio – Welcome to the Show: Field Museum-Sponsored Expedition Films (1920s-1930s)

Amy Sargeant – Lever, Lifebuoy and Ivory
John Fullerton and Elaine King – Looking back, looking forward: colonial architecture in Mexico at the turn of the twentieth century and its representation in photography and the illustrated press
Denis Condon – Receiving News from the Seat of War: Dublin Audiences Respond to Boer War Entertainments
Martin Loiperdinger – Screening the Boer War in Germany: Audience Response and Censorship

Professor Heard introduces modern audiences to the weird and wonderful magic lantern entertainments once presented in public halls and private drawing rooms throughout the 19th century. Each show is different and draws on a unique collection of original 19th century mechanical moving pictures, sights, frights, moral warnings, adventures, pictorial curiosities and fascinating information. This is a specially commissioned show focusing on material related to the First World War.

Tom Rice – Presenting the Empire on Screen: The Empire Series (1925-1928)
Emma Sandon – Cinema and Empire: The Prince of Wales Tour 1925
Scott Anthony – Snowden Gamble and the films of Imperial Airways
Maurizio Cinquegrani – From Sydenham to Hyderabad: a Cinematic Map of the British Empire and its Cities

Samantha Holland – The hilarious joke of miscegenation in turn-of-the-century US films and culture
Paul Maloney – St George and Ali Baba: the visual culture of pantomime in Edinburgh in 1869
Matthew L. McDowell – Newspaper cartoons and the drawing of early Scottish football, 1865-1902
Andrew Shail – ‘The Great American Kinetograph’ in Britain: Film, Fakery and The Boer War

The Crazy Cinématographe is a touring spectacle celebrating the films produced in Europe during the first decade of the twentieth century. The show celebrates the work of the European film archives by producing a prestigious and entertaining showcase for those little known wonders only known to archivists, historians and festival goers, but not to the general public.

Booking form and accommodation details are available from the National Fairground site.