This month sees the premiere of a new silent film (albeit one that seems to have been made in 2007), which is always a cause for rejoicing here at Bioscope Towers. The film is question is Universal Signs, a silent film for the deaf, presented what the official site describes as “mesmerizing American Sign Language with English subtitles”. The film looks to be one of those heartwarming tales of human relationships which tend to be a matter of taste, but here’s how the site describes the film’s appeal:

After the death of his fiancée’s daughter while in his care, Andrew (Anthony Natale, Mr. Holland’s Opus), a Deaf artist, becomes a prisoner of his own mind. Tormented day and night by memories and self-blame, Andrew falls in a downward spiral of depression and anger that alienates everyone around him. It is only through a serendipitous friendship and new love with Mary (Sabrina Lloyd, Sports Night) that Andrew is able to sense the life around him – forgive himself, rediscover his muse, and experience the transformative power of love.

Elsewhere they claim that the film “has the unique distinction of being the first feature film that embraces sign language in the storytelling of a film, rendering it a foreign language film for the hearing audience”. I don’t know enough about deaf cinema to know if this is a credible claim, but it will be a notable achievement if the film communicates equally to both kinds of audience. All of the deaf characters are played by deaf actors, and the film is wholly silent, with music score, bar a few snatches of audible dialogue. Hearing audiences are provided with captions to explain the dialogue.

There seems to be a certain amount of religious impetus – the site stresses its inter-denominational appeal, there’s a central character who’s a priest, and promotional blurb includes such lines as “by promoting UNIVERSAL SIGNS you send a message that TRANSFORMATION and CHANGE is happening. All we need is each other and FAITH in the possible and freedom to FORGIVE”. A Roman Catholic in Philadelphia which holds masses in American Sign Language features in the film. 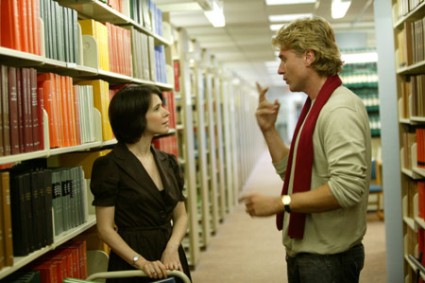 There’s plenty more information on the site. There you can find out about sign language, deaf cinema, captioning, and how to help promote the film. You can also buy T-shirts, mugs and postcards, download screensavers, and pre-order the film on DVD. It is screening at the Toronto International Deaf Film and Arts Festival on 21 May, and it has had earlier festival screenings in 2008, though what is described as the world premiere takes place on 30 May at the Keswick Theatre, Glenside, PA.

Finally, there’s a review of the film from a “sign-impaired” Erik Childress of the Chicago Film Society, which has this passage on its allegiance to the silent cinema:

There’s also something magical that occurs without calling obvious attention to itself when Universal Signs actually gets around to embracing its roots in the history of silent film. Developments in the plotting may give you the occasional eye roll for either their contrivance. But when you discover the big reveal during an Easter dinner scene, those versed in the schools of Chaplin or clavical-themed westerns will recognize the subtle shift in Renzetti’s score and provide new light on the direct convenience of an early antagonist and the second one it spawns. It’s not a far trip to imagine this dinner sequence with full title cards and speeded-up film in a full-on homage to the beginnings of motion pictures before we could all hear Al Jolson.

It’s disappointing to see that mistaken reference to “speeded-up film”, but otherwise this sounds like a film that deserves to make its mark.