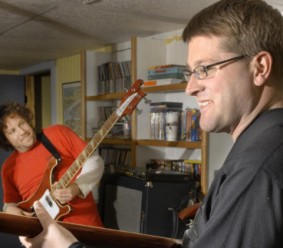 This report from Maine Today on some local rock groups taking it turns to provide scores for silents rather appealed:

The members of the Sumner McKane Group composed their latest musical work while watching grainy, black-and-white footage of an Inuit man hunting seals to keep his family alive in the frozen Hudson Bay region of Canada 86 years ago.

Not exactly your typical pop-song fodder.

“There’s sort of a desperate sadness to some of it,” said McKane, guitarist for the Portland instrumental trio.

McKane and his bandmates – Josh Robbins on bass and Todd Richard on drums – have been working for three weeks on creating an original score to the classic 1922 silent documentary “Nanook of the North.”

They’ll perform the music live while the 79-minute film is shown next Wednesday and Thursday at One Longfellow Square in Portland as part of the 200-seat venue’s monthly series, “Local Scores, Silent Films.”

Each month, a different local band picks a silent film and composes a score for live accompaniment. This will be the fourth concert/film showing in the series, following Buster Keaton’s “The General,” scored by Samuel James; Fritz Lang’s “Metropolis,” scored by the Improvisational String Quartet; and the classic German vampire film “Nosferatu,” scored by the jazz group Tempera.

Tom Rota, manager of One Longfellow Square, said he contacts bands to find out if they are interested, then gives them a list of classic silent films from which to choose.

The venue presents a mix of live music, dance, film and other performances and was known as the Center for Cultural Exchange before the current owners bought the building and reopened as One Longfellow Square last July.

In a sense, the venue is recreating the theater experience of the silent film era, when live musicians, usually a pianist, performed onstage or in an orchestra pit while the movie played onscreen. By using modern scores, it’s giving the tradition a modern twist.

McKane said when he was approached about the series, he immediately thought of “Nanook of the North.” He had seen it, was fascinated by it and thought its slow pace and human themes would fit his band’s brand of instrumental music, which includes rock, country and ambient music.

“There are a lot of still shots of the landscape, which allow for some spacious music. That’s better for us than something that’s action-packed,” said McKane, 31.

Considered the first full-length anthropological documentary, the film follows a year in the life of Inuits in Arctic Canada. It was made by Robert Flaherty, who went to Hudson Bay looking for iron ore on behalf of the Canadian Northern railroad. While there, he became intensely interested in capturing Inuit life on film.

In the film, Nanook takes his family on a hunting expedition to try to get enough food to survive another winter. The family travels on dog sled, hunts with spears and sleeps in igloos that have to be made on the spot every night.

Being a documentary, it’s very different from most of the classic silent films that often get shown today with live musical accompaniment. Horror films, epics and slapstick comedies are the usual suspects for this kind of silent film/live music series.

To compose the score, McKane, Robbins and Richard have been gathering in the basement of McKane’s North Deering home. They got a copy of the film from Netflix and watched it on a laptop computer as they composed and played. When they got a piece they liked, they went back to make sure it matched up with a segment of film.

It’s a fairly slow process. At a recent rehearsal, band members estimated it took maybe four hours or more to get about 25 minutes’ worth of music for the film.

During rehearsal, the band focused on part of the movie that takes place in the heart of the Arctic winter, when the family has little food left.

While the family slowly travels over a barren, icy landscape, the band plays music that’s spacey and full of echo, with Mark Knopfler-like guitar work. When Nanook traps a small fox, the music becomes faster and joyous.

Another scene where the music mimics the mood is when the family struggles to get its dogsled through a field of ice boulders. Once the sled goes up and over the last hill and can travel freely, the band explodes into a fast, thumping, rock ’n’ roll passage.

Matching music to scenes is a challenge, as is remembering all 79 minutes of the piece in sequence.

The Maine Today report provides a sample of the Nanook music.