April 22, 2008 By urbanora in Others arts, Pre-cinema, Technology 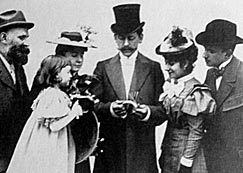 Another day, another outstanding website. Out of the blue Flipbook.info has appeared (well, out of the blue to me – it’s been around for a while), and I warmly recommend it to you. It is a site dedicated to the history, definition and usage of the flipbook, that sister technology of the silent cinema. It defines the flip book, or flick book, thus:

A flip book is a collection of combined pictures intended to be flipped over to give the illusion of movement and create an animated sequence from a simple small book without machine.

Flipbooks became very popular in the late nineteenth century, and are still produced today – indeed, who among us has not created their own basic flip sequence by drawing successive figures at the corner of the pages of a school exercise book? (You mean you haven’t? – go out and do so straight away and discover what intermittent motion and animation mean). But it was at the end of the nineteenth and into the early years of the twentieth century that flipbook technology overlapped with, indeed shared with cinema technology.

The Mutoscope (left), better known to many as ‘what the butler saw’, was one of the first photographic motion picture viewers. Invented by Herman Casler in 1895, the Mutoscope presented radially-mounted photographs on card which were flicked over in rapid sequence to give an illusion of movement. The American Mutoscope and Biograph Company was formed to exploit this invention, in tandem with 70mm films created by the Mutagraph camera, so that the same source generated product for showing on the big screen to a variety theatre audience or as a private pleasure for the single peepshow viewer. The company eventually shed the Mutoscope part of the business and became simply Biograph, took on a film director by the name of D.W. Griffith, and you know the rest. Other such hybrid technologies, using cinematograph films to generate the photographic sequences for flip cards, were the smaller Kinora viewer, invented by Auguste and Louis Lumière, and the Filoscope, invented by Henry Short.

All this and much, much more is covered by the site, which describes (with beautiful illustrations) an amazing range of flipbook views from the early years of the twentieth-century, demonstrating the interelationships with cinema, and how the form has been employed to illustrate sport, advertising, comic strips, pornography, even news and politics, how it has been used by artists, and how books themselves have use flipbook images. It is an astonishingly diverse field 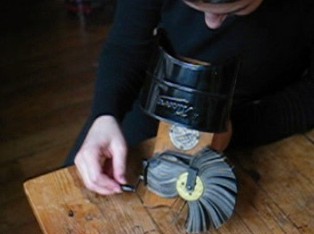 And that’s not all. As well as the rich selection of images, there are demonstration movies for some of the types of viewer, including the Filoscope and the Kinora (frame grab right). The bilingual (English and French) site is the creation of Pascal Fouché, and is divided up into History, Typology, Viewers, Links (publishers, retailers, artists etc) and a blog (in French). The pags come with footnotes, and the knowledge on display is mightily impressive. Indeed my only criticism is that the search option only works in French – but do use it, because it brings up a whole load more images from a database, apprently of 4,250 flipbooks. Amazing stuff, lovingly put together, but as accessible as it is scholarly. Go explore.