February 22, 2008 By urbanora in Publications, Technology 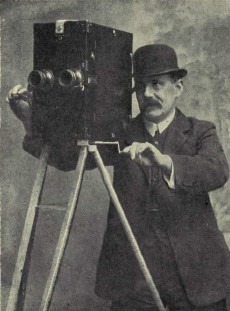 William Friese-Greene, from The Handbook of Kinematography

Just in at The Bioscope Library is one of the standard technical manuals of the period, and boon to many a film historian ever since, Colin Bennett’s The Handbook of Kinematography. Bennett was a cameraman, inventor (he devised a colour cinematograph process, Cinechrome, in 1914) and regular contributor on technical subjects to the Kinematograph and Lantern Weekly. This handbook, published by the Kinematograph Weekly in 1911, is a thorough and handsomely illustrated account of early motion picture technology and the practicalities of producing and exhibiting films.

It is easiest to give an idea of the range of the book by listing the chapters:

Part 2:
1. The Elements of Projection
2. Persistence of Vision
3. Apparatus used in Projection
4. The Illuminant. Electricity
5. Limelight and Minor Illuminants
6. In the Operating Box

All you needed to know, really. Some of Bennett’s understanding of film history is askew (particularly his patriotic championing of William Friese-Greene’s nebulous achievements), but for the motion picture technologies of the day his knowledge is prodigious, leavened with a lot of practical commonsense, and the illustrations alone (along with some contemporary advertisements) are a rich source of information. The book is available from our old friends the Internet Archive, in DjVu (16MB), PDF (44MB), b/w PDF (19MB) and TXT (689KB) formats.

One of the frustrating things for the online early film researcher has been the lack of film reviews available from the film trade press, as opposed to those in newspapers, whose digitised availability has been covered here several times. One exception in the Pacific Film Archive’s Cinefiles database, mentioned recently. Another is the venerable American film journal Variety, a selection of whose archive reviews are being put online.

It’s only a selection, so one hopes that it will continue to grow, but what’s there already is choice stuff, not least because they’ve selected some of the more familiar titles from the silent era. Seaching is either by word or by year, with a calendar of hyperlinks to individual years (some of them divided up into quarters). So, for the earliest year of the archive, 1914, you can find reviews on The Battle of the Sexes, The Escape, Home Sweet Home, Judith of Bethulia, Tess of the Storm Country and Tillie’s Punctured Romance. While for 1923 you get Anna Christie, Safety Last, The Christian, The Covered Wagon, Fury, Hollywood, The Hunchback of Notre Dame, Our Hospitality, Peg O’ My Heart, Ruggles of Red Gap, Scaramouche, The Ten Comandments, The Three Ages, The Wandering Jew and A Woman of Paris. Quite a year.

As a sample (from 1923) of what you’ll find, here’s that rarity for the time, Variety saying something positive about a British film:

With this Stoll picture Matheson Lang established a right to be regarded as a screen star. Throughout his impersonation of the Jew, condemned to wander through the ages, arrogant, proud, though broken-hearted, ever within reach of happiness, but always overtaken by disaster just as he is about to grasp his heart’s desire, is masterly.

The story follows the Temple Thurston play fairly close. In the opening scenes we see the Jew, Matathias, and his lover, Judith, his reviling of the Saviour on His way to Calvary and the dreadful outlawry which sent him into the world a wanderer. Thirteen hundred years pass and he is among the Crusaders; again a lovely woman loves him, but again fate stands between him and happiness, and so the story goes down the years until at last the Inquisition gives him the peace and eternal rest which before have always been denied him.

Spectacularly, the production is very fine and the subject is treated with great reverence by Maurice Elvey.

Conversely, here’s Variety in 1928 somewhat at variance with posterity, dismissing a film now widely considered to be one of the outstanding masterworks of the silent cinema:

Some stories are just naturally poison for screen purposes and Dorothy Scarborough’s novel here shows itself a conspicuous example. Everything a high pressure, lavishly equipped studio, expert director and reputable star could contribute was showered on this production. Everything about the picture breathes quality. Yet it flops dismally.

Tragedy on the high winds, on the desolate desert prairies, unrelieved by that sparkling touch of life that spells human interest, is what this picture has to offer. It may be a true picturization of life on the prairie but it still remains lifeless: and unentertaining.

The story opens with an unknown girl, Letty (Lillian Gish), from Virginia, train-bound for her cousin’s ranch, which she describes as beautiful to the stranger, Roddy (Montagu Love), who has made her acquaintance informally.

Roaring, blinding wind and sandstorms immediately frighten the girl. She remains in a semi-conscious state of fright throughout, excepting at the close of the picture.

At Beverly’s (Edward Earle) ranch the girl becomes too popular with Cora’s (Dorothy Cummings) children and is forced to leave. The girl then accepts a proposal from Lige (Lars Hanson), whom she had laughed at the night before. During a round-up of wild horses, brought down by a fierce northern gale, Roddy forces his way into Lige’s home and stays there for the night with Letty.

All in all, a very welcome selection of classic reviews (which goes on up to the present day), which hopefully may be expanded in due course.