January 4, 2008 By urbanora in Technology 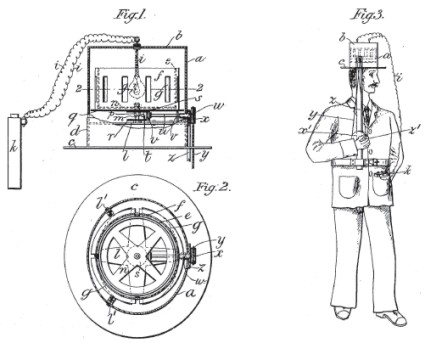 While working on some patent records for the forthcoming colour series, I came across some would-be inventions which never took off. It’s interesting, for example, to see how someone like William Friese-Greene was a serial patenter, not only patenting early cinematographic devices (and colour cinematography systems) but applying for patents for such wildly varying subjects as means to measure electricity, paper manufacture, and even airships. George Albert Smith, a rather more successful inventor of a colour system, certainly thought beyond film. His huge range of patent submissions over twenty years (1895-1918) includes cycle cranks, spinning mules, means to extract corks from bottles, garden ploughs, golf bags, means to preserve fish, and bacon slicers.

But the Friese-Greene invention above is my favourite wrong turning, and I had to share it with you. Dating from 1898, Means or apparatus for producing and exhibiting animated or changing pictures on advertising appliances &c. is, essentially, a system for displaying motion pictures on your hat. As you can see, the motion picture band goes around the hat, a crank handle is operated by the right hand, and batteries in a jacket pocket are connected to an illuminant in the hat. But let the patent application itself describe what’s going on:

The invention chiefly consists in the combination of a transparent or translucent screen, means for attaching it to the person, a film or sheet bearing a series of successive pictures, preferably such as are adapted to produce what are generally called “animated” pictures, means whereby the said film or sheet is caused to travel opposite the screen, so that the pictures are thrown upon or exhibited through it, and a lighting or illuminating device for lighting up the pictures and screen.

Friese-Greene offers us two versions of the invention. Above is the hat version (the hat is meant to be translucent). Below is the alternative, marginally less hazardous if not less improbable version where the man carries a screen above his head.

Needless to say, the human motion picture advertising did not make it to reality. Brighter minds than mine could tell you whether it could be built, and whether the wearer would soon burst into flames or not. But you do want to imagine just what the effect would have been of a Victorian gentleman confidently striding down Oxford Street with motion pictures (how would anyway one actually see them?) playing across his headgear.

I wrote a post some while ago on how to locate early motion picture patents online. The above is a US patent (no. 623,242), which was filed 7 July 1898 and patented 18 April 1899. It comes from Google Patents, which is very easy to use, and quite addictive. Maybe there’s a mini-series here, on wildly wrong early cinematograph patents. I’ll see what I can find…

Update (February 2008): Astonishingly, it seems that William Friese-Greene was a man ahead of his time. A company, Wearable Video Inc., has come up with a ‘vest’ with a screen for showing “full motion video with stereo sound”, with the idea of using the same as a promotional tool at trade shows, city events etc. William, I’m sorry to have wronged you – you were a visionary after all.