April 17, 2007 By urbanora in Archives and museums, Cinemas, Non-fiction 3 Comments 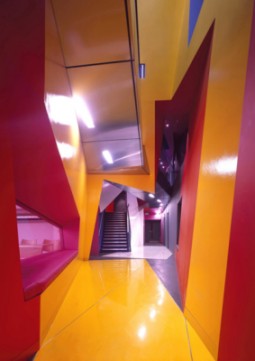 I have just come from a special screening at the amazing new Centre for Research and Visual Media at Birbeck. The design is based on the renowned angular sets for The Cabinet of Dr Caligari (1919); ingeniously fitted into a limited space, yet strangely in harmony with the Georgian frontages of Bloomsbury that surround it. The reason for attending was the launch of the new London Screen Study Collection, a planned accessible reference library holding viewing copies of moving image material made about and in London, housed at Birkbeck.

To start the launch off we were shown the recently rediscovered Living London (1904), ten minutes of an original forty-minute film showing familiar sights and scenes from London. The film is sensational. So very little footage survives showing the London of 100 years ago, and suddenly here are sequences full of animation and character showing Covent Garden, the Strand, the City, Trafalgar Square, St James’s Park, and a Thames teeming with river craft, all in 1904. The film was made by the Charles Urban Trading Company, and includes a sequence showing sandwich board men advertising Charles Urban‘s ‘Urbanora’ film shows. It is a proto-documentary in Urban’s best style, alive with movement, sharply edited, and giving equal attention to monuments and people.

The film was discovered by Professor Ian Christie at the National Film and Sound Archive in Australia. How it got there is quite a story in itself. It was exhibited across Australia in 1904/05 by showmen John and Nevin Tait, who did so well out of presenting the film to Australians keen to see images of the old country, that it enabled them to go into film production themselves and to produce The Story of the Kelly Gang (1906): Australia’s, and indeed the world’s first feature film.

We were only shown a videotape. The film proper will undergo restoration as part of a larger collection, and should hopefully receive a proper ‘premiere’ at the Pordenone Silent Film Festival in 2008.