One of the plans behind The Bioscope is to develop themes, or strands, one of which is memoir evidence of filmgoing in the silent era. There are still people around who can be intervciewed about cinema in the 1930s, and assorted oral history programmes exist, but for the earlier period, if we want to recover what the experience of going to the cinema was like, we must have recourse to memoirs, oral history recordings, or contemporary interviews.

I have collected a large number of quotations from memoirs of life in London before 1914 which have references to the cinema. One marvellous passage that I was not able to use in my research, simply because it comes from the north of England, is in Jack Common’s autobiographical novel Kiddar’s Luck (Turnstile Press, 1951). This is a classic memoir in any case, but his recollections of going to see films pre-World War One in Heaton, near Newcastle-on-Tyne, are observant and richly informative:

He [his father] still took me about with him on occasion. We had a more or less established practice on a mid-week night of the day-shift of going to a new entertainment called ‘the pictures’, or in older dialect, ‘the pictors’. This was a cheap night out for him. The pictures cost no more than a copper or two, and my presence preserved him from extensive drinking if he ran into any of his mates. He always did. The two of them would disappear into a pub, leaving me outside …

Because I was outside, my father had an excuse for the curtailing of good cheer which his economics as a raiser of young on a working-man’s wage was asking for. Soon we made our way from pub to picture-hall to be followed all in good time, by many millions born and unborn who were to find themselves propelled by the same reasons that moved us toward this organized dreaming in semi-darkness and drought.

We then get a vivid picture of the reality of the cinema performance, with the important observation about the transitional nature of the audience from the conviviality and sense of ownership inherited from music hall, to the future ‘threat’ of the Art of Cinema:

It wasn’t so very organized for us, of course. The hall was in fact, a shabby affair which must have been a mission at some time. It had no electric signs or elaborate foyers. There might have been a couple of posters, and there was an old woman sitting by the kerb selling little hard pears out of a soap-box on wheels. Inside, there was no ramp to the floor. The seating was forms or hard chairs linked in fives by planking. If you couldn’t see at the back, you stood up; if the people in front of you stood up, you climbed in to your seat. This happened in moments of culminating excitement when on the screen – but it had ceased to be a screen; it was events we all saw with our own eyes – the faithful dog panted over the last ridge with the message that meant reprieve in its collar, or the blood of the wounded hussar dripped through the trap-door on to the table at which his enemies stood. I yelled and stamped on my feet, and was often in danger of falling into the next row or knocking somebody’s hat off, all of which amused my father immensely. Most of the audience made some noise or other. You see, they were recruited from the music-hall and the melodrama; they had not yet learnt the separate and introverted enjoyment so proper to the Art of the Cinema. The fact that the pictures were silent gave everyone a natural right to comment as and when and how. They weren’t taking the mike out of the show, by any means, no. Films were still far too real for anybody to be cynical about them. It was the utterly convincing reality of these scenes which compelled us to behave as though we were at the point of joining in upon them.

Rare for memoirs of cinema-going at this time, he puts in something about the musical interludes that were a common feature of the first shows:

Half-way through there was a musical interlude during which patrons had time to withdraw for refreshment to the nearby boozer. The lights went up on a shallow stage behind a row of artificial flowers and ferns. At the side of that, a gramophone began playing. There was a great deal of shuffling in the rows as stout matrons in cloth caps and shawls and heavily moustached blokes in mufflers or celluloid dickies pushed their way out. Quite a lot of these worthies never returned. When that became apparent without a doubt there would be a scramble for better seats on the part of those who reckoned themselves unsuited. But for the while we waited until the slides came on. The gramophone struck up ‘When the Fields are White with Daisies, I’ll Return’, and the first slide showed on the screen as half the lights were dimmed. It showed a sailor taking leave of his sweetheart – upside-down because the operator had gone out for a drink, too, and his boy had taken over. As the gramophone scratched and hooted its way through the immortal ballad, we waited to cheer each new slide.

When the fields are white with daisies
And the roses bloom again –
Let the lovelight in your heart
brightly burn.

For I’ll love you, sweetheart, always,
So remember when you’re lonely –
When the fields are white with daisies,
I’ll return.

He concludes with some delightful memories of the ramshackle nature of the cinema show, and a reminder that not evertyone was totally in thrall to the silver screen:

At last, there was Jack with his kit-bag at the girl’s feet and very truly the fields were white with daisies. We all joined in the final chorus and cheered its conclusion. Yes, but where was the operator? Very likely, after an interval of general unease and peering about, that last slide would wriggle across the screen and be held through a complete repeat of the song. The second half of the programme was often bulked out with films we had seen before, or with old news-reel material rather grossly re-edited in the projection box. A popular item such as King Edward’s funeral got dished up in some very queer shapes as the continued ripping of sprocket-holes made more and more cuts necessary.We were well-satisfied. I used to describe the whole show to my mother afterwards, and it always annoyed me that she couldn’t be made to understand the magic of it. She thought it was some trick business, manifestly inferior to the theatre, that’s why it was so cheap.

Marvellous stuff. Look out for more in future posts – and hopefully not just from Britain. 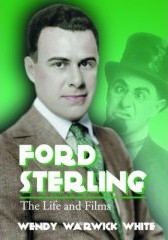 Ford Sterling is one of the forgotten comedians of the silent era, known if at all as the Keystone comedian whose brief star was eclipsed by the arrival of Charlie Chaplin. A new biography by Wendy Warwick White (presumably the first devoted to Sterling) ought to do much to overturn assumptions and revive his reputation. Blurbs for the books indicate that he left behind a comfortable, middle-class childhood to journey via circus, vaudeville, burlesque, Shakespeare and Broadway to achieving fame as a silent film comedian. His film career was not ended by Chaplin’s rise, instead he became a successful character player and made a successful transition to sound. He was a cartoonist, photographer, and became a millionaire. But this once famous figure has been left aside by history. Sterling’s films are probably only ever going to be of interest to the specialist now, but this sounds like a personal history well worth recovering. Ford Sterling: The Life and Films is published by McFarland.