The Death of Poor Joe

The BFI has scored a considerable coup, revealing that it has uncovered a copy of what is not only the earliest surviving film based on a Charles Dickens character (in this the bicentenary of Dickens’ birth), but a film that apparently no-one had identified as being Dickensian before now. The film was discovered by the BFI’s silent film curator Bryony Dixon while she was investigating early films of China. She spotted the connection between a film in the archive entitled Man Meets Ragged Boy with a late 1900/early 1901 (the exact production date is uncertain) film The Death of Poor Joe, made for the Warwick Trading Company by Brighton director G.A. Smith, the title of which made Dixon think of the character Jo the Crossing Sweeper in Dickens’ novel Bleak House. The film was donated to the BFI back in the 1950s by collector Graham Head, who was a friend of Smith’s. The previous earliest surviving Dickens film was Scrooge; or, Marley’s Ghost, issued by Robert Paul in November 1901, as also held by the BFI.

So why was it missed all this time? Well, I don’t know why Man with Ragged Boy was overlooked, except that I don’t remember the title at all from the dim and distant days when I was at the BFI, so maybe it was lurking in some neglected corner for the past sixty years. But the reason no one seems to have spotted the Dickens connection is that Jo was written as Joe. Jo the Crossing Sweeper is a minor character in Bleak House, a pathetic, homeless boy who sweeps horse manure from the streets, knowing nothing but the wretched small life to which he is condemned, a metaphor for neglected childhood. In the novel, Jo collapses outside the gates of Tom-all-alone’s Cemetery before dying at a shooting gallery.

The character in the film we now have is partly Dickens, partly something else (Hans Christian Anderson’s The Little Match Girl, suggests the BFI press release). Here he dies in the snow outside the gates of an unspecified building, attended to by a nightwatchman who shines a lantern in the face of the dying boy, who clasps his hands together in prayer. There is no nightwatchman in the novel, and no snow, but Joe/Jo is carrying a broom which makes the identification with Dickens fairly certain (Jo in the novel also dies in mid-prayer). 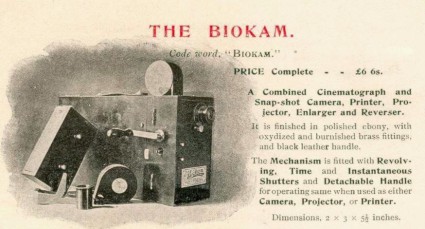 The film is a Warwick Trading Company production (manager one Charles Urban, of whom you will have heard me speak before now). At this time Warwick were issuing some films in both 35mm standard format and cheaper narrow gauge 17.5mm format for its Biokam camera-printer-projector, which was aimed at the domestic market. The Biokam, invented by Alfred Wrench, was originally designed for people to shoot their own films when it was launched in 1899, but Warwick soon started supplying ready-made films for people to project in their own homes. The Death of Poor Joe was one such film, though it is the 35mm version that survives, not the 17.5mm. The 17.5mm copy would either have been optically reduced to the narrower gauge, or possibly could have been restaged entirely for the different format, as sometimes happened with Biokam films. It is listed in the 1901 Warwick catalogue (catalogue number 1021), which was issued around March 1901. What is also intriguing about Biokam films is who made them. G.A. Smith himself was certainly in charge of their production, but there is this intriguing snippet from an October 1899 interview with Smith in the Brighton Herald which indicates a joint responsibility. The reporter complains that films look to be too expensive for the humble amateur:

“All in good time,” said Mr Smith. He brought out a small hand-camera. “This is a camera in which I am interested and which I expect will soon be all the rage. Films are being made for this that will cost only 3s. 6d. a minute.” Then Mrs Smith came in to borrow the identical camera, to go off and photograph the waves breaking over the Hove sea all.

Mrs G.A. Smith, film director? Quite possibly. Her name was Laura Bayley, and it looks like her who plays Joe/Jo in the film (or just possibly her sister Eva), though it has to be said she is rather too robust and tall to convince much as a neglected waif. The nightwatchman is possibly played by another Brighton performer, Tom Green, a regular in Smith’s films.

The film was very likely to have been based on a stage original (Bayley was a stage actress and pantomime artist in Brighton) or possibly a magic lantern slide set. It has that look of deliberation which comes when something is being followed closely, particularly the actions of the nightwatchman. Further investigation of the film’s production origins may reveal just how closely or tangentially it is related to Dickens’ novel. The film is also interesting for the effect of the nightwatchman’s lamp light (created by a light shining off-screen) and for the wind-blown backdrop with the shadows of branches – the film was clearly made in the open-air (probably St Ann’s Well Gardens in Hove, when Smith had an open-air studio).

Anyway, it is a cleverly timed discovery which has captured the news media’s attention. The film featured this evening at the BFI South Bank as a surprise extra item in a programme of silent Dickens film shorts, which will be repeated on 23 March. It’s already turned up on YouTube, as you will have seen, and the Bioscope must now adjust its Dickens on silent film filmography to incorporate this latest discovery.

Meanwhile let’s all look out for The Death of Nancy Sykes, made by the American Mutoscope Company in 1897 and starring Mabel Fenton as Nancy and Charles Ross as Bill Sykes, from Oliver Twist. The very first Dickensian film remains a lost film.