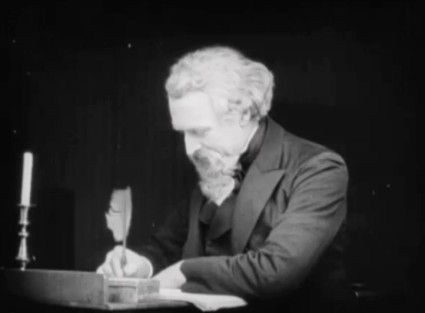 Let Dickens and the whole ancestral array, going back as far as the Greeks and Shakespeare, be superfluous reminders that both Griffith and our cinema prove our origins to be not solely as of Edison and his fellow inventors, but as based on an enormous cultured past; each part of this past in its own moment of world history has moved forward the great art of cinematography.

As I write this, in Rochester, Kent, I can look out of my window at the corner of St Margaret Street where, ninety-nine years ago, John Bunny drove past in a carriage, dressed as Mr Pickwick for the turning camera handles of the Vitagraph Company of America. And yesterday and today, on BBC television, we saw a fevered The Mystery of Edwin Drood, much of it filmed fifty yards away in the grounds and centre of Rochester cathedral. Here is the heart of Dickens, and the heart of a grand cinematographic tradition.

Charles Dickens was born two hundred years ago, and his great legacy is being celebrated with books, exhibitions, festivals, conferences, programmes and film seasons. His superabundant influence on cinema and television has been recognised in particular, with a three-month film season at the BFI Southbank underway, an Arena documentary Dickens on Film (with copious examples from the silent cinema) and new television productions of Drood and Great Expectations. Dickens remains something to see.

Dickens was hugely important to the silent cinema, as Eisenstein noted in his famous essay, ‘Dickens, Griffith and the Film Today’, which points out the principle of montage inherent in both Dickens’ novels and D.W. Griffith’s films. Every one of his novels was filmed during the silent era, most more than once. There were specialist Dickens filmmakers, such as Thomas Bentley and A.W. Sandberg. Charlie Chaplin (perhaps the most Dickensian of all filmmakers) loved his works, reading Oliver Twist many times over. It was not just Dickens the novelist who inspired the first filmmakers but Dickens the lover of theatre and the many stage dramatisations of his work. Dickens’s work naturally spilled out of the pages that could not fully contain them onto other dramatic platforms – the stage, the recital, the magic lantern, the cinema. Like all good works of the imagination, they transcend the boundaries of any one medium.

As a contribution to the Dickens bicentenary, and by way of demonstrating his great importance to early film, we have put together a filmography for Dickens and silent cinema. It may be the most extensive yet published; it certainly tries to clear up some of the confusion to be found in listings elsewhere, though there are still problematic corners, and doubtless films still to be identified. It lists both fiction (arranged under the works that inspired them) and non-fiction films, and notes where films still exist (as far as I can discover), and if they are available online or DVD. Where it says afilm is lost, this should not be taken as definitive, as some films will be held privately (noted here as Extant where I have information on these). Please let me know of any errors or omissions.

The Cricket on the Hearth 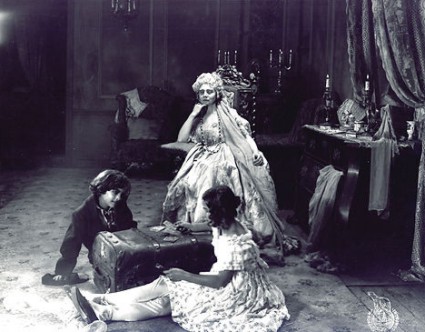 The Mystery of Edwin Drood

A Tale of Two Cities

Uncertain titles
Some sources give a Barnaby Rudge (USA 1911) directed by Charles Kent. Kent was working at this time for Vitagraph, and there is no record of such a Vitagraph production. Denis Gifford, in Books and Plays in Films 1896-1915, lists a one-reel Oliver Twist apparently made in Denmark in 1910, but no such production can be found in the online Danish filmography. Some sources list a German Oliver Twist directed by Lupu Pick in 1920, but this appears to have been a production announced but not completed. Magliozzi lists an American 1922 Scrooge held by UCLA, but this is probably the UK title from the Tense Moments with Great Authors series. The 1924 Bonzo cartoon Playing the Dickens in an Old Curiosity Shop (UK 1925) uses only Dickens’ title. The UK 1904 film Mr Pecksniff Fetches the Doctor has no connection with Martin Chuzzlewit. 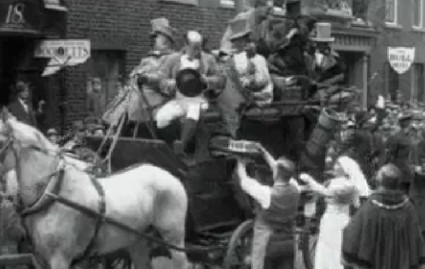 The Pickwick Coach halts near to the future New Bioscope Towers, from the newsreel Mr Pickwick (Pathé Gazette) (1927), from British Pathe

This filmography is indebted to the American Film Index volumes, Denis Gifford’s British Film Catalogue and Books and Plays in Films 1896-1915, Ron Magliozzi’s Treasures from the Film Archives, the Silent Era website’s Progressive Silent Film List, Filmportal, the Danish national filmography, the American Film Institute Catalog for silent films, the Pordenone Silent Film Festival’s Vitagraph Company of America catalogue, the BFI Film & TV Database, News on Screen, the IMDb and other sources. Only when I had exhausted these did I turn to the filmography in Michael Pointer’s Charles Dickens on the Screen. This had two or three titles that had eluded me, a number of film lengths that I hadn’t tracked down, and all in all is a fine piece of research. I commend it to you.

Update (12 February 2012): My thanks to friends at the BFI for some corrections and additions now made to this filmography.