It’s Friday October 7th, and we’re on day seven of the Giornate del Cinema Muto aka the Pordenone Silent Film Festival. Once again our anonymous reporter, The Mysterious X, picks up his pen and uncompromisingly tells us like it is. Take it away, X.

Already the looming end-of-a-holiday feeling, as we gather once more at 9.00am …

First a trailer for the Kertesz film Das Spielzug von Paris (The Plaything of Paris) (Austria 1925); at least it was billed as such; we got so many shots of the female lead Lily Damita wearing the legal minimum – and as much jewellery as fabric – I began to suspect it may have been a compilation of censor trimmings. How representative the trailer was, we would find out the next day.

After Fiacre 13 I had renewed hopes of the Kertesz strand, but they were soon dashed; the lead characters – apart perhaps from his Napoleon – seemed to have walked straight off the stage, and much of the film followed suit. When Kertesz opened the film out to a military street parade, or to the battle proper, the film breathed … but not for long enough. The switchback hate/love/hate/love relationship between the supposedly vengeful son and the French aristocratic target/lover/target/lover may have worked over the apparently five-hour length of the Schnitzler play, but it needed better actors than we had, to make it anything other than ludicrous in 1hr 20 mins …

I made a last-minute decision NOT to take a very early lunch and stayed for Cenere (Italy 1916) a melodramatically-plotted film about a young man, abandoned as a child, searching for his mother; the main selling point being that this was the sole film appearance of Victorian theatrical legend Eleanora Duse. It was a good film, if somewhat underwritten, and had some really beautiful location settings – but Duse was spellbinding. In early shots, where she is the young mother, the 58-year-old Duse wears a rural bonnet that obscures her face entirely; she acts physically only, but with restraint. Later, when she is playing closer to her own age, that restraint remains – there are large gestures, but used sparingly and only at the peak dramatic moments…but her face; her face is that of an aged medieval saint, it carries her age and her life upon it, her emotions lurking beneath, barely registering. Utterly unstagelike, utterly (for this period) unItalian; utterly perfect and a real revelation. That the film flopped and she returned to the stage was the real tragedy; she could have rewritten screen acting history if this was anything to go by.

After lunch, Salomy Jane (USA 1914) from the Treasures of The West thread … and another cracker. Made by the short-lived California Motion Picture Corp in the redwood forests, it’s the equal of any feature I’ve seen from this early in the 20th Century; a tale of infighting and rough justice amongst the ’49ers, it starred latina opera star Beatriz Michelena as Salomy Jane, and Bristol-born House Peters as the man she desires … as the film is now available I won’t go into huge detail beyond recommending it (and the rest of the set), but it’s refreshing and salutary to see how unlike the stereotyped Western adventure the early films were … before the dead hand of ’30’s serial production and the cliches took a stranglehold.

Tariel Mklavdis Mkvlelobis Saqme (The Case of Tariel Mklavadvis) (Georgia SSR 1925) – another Georgian feature, and an adaptation of a late-Victorian tale of death and revenge; told in flashback from a courtroom, each part of the action being testimony from a different witness, prosecution or defence, in a case where a Georgian playboy prince – or serial rapist to be more accurate – is kiled by the widower of one of his victims. It’s the widower on trial.

Well constructed, well acted, and as usual, with powerful use of location settings … and yet another impressive entry in the Georgian strand year 2 … though few enjoyed the extended dream/premonition sequence where a vulture disembowels a live dove. Slowly.

Blazing The Trail: The O’Kalems In Ireland (USA 2011) A new documentary on the Kalem Company, and in particular the Sidney Olcott/Gene Gauntier troupe that operated in Ireland in the years before WW1. Well made, with good interviews, archive footage and heavy use of Gene Gauntier’s unpublished memoirs, it made interesting points about how the Irish diaspora changed American culture in the 1880’s-1910’s period; and how Irish-Americans became increasingly psychologically detached from the real Ireland, but increasingly engaged with the romantic Ireland. This was a trap Olcott himself fell into, the film implies; Gauntier herself wrote that – eventually – they “Made allowances for Irish imagination” in the stories of unceasing cruel oppression – while Olcott continued to film those tales … and there were times where one felt that the Irish-American makers of the documentary were in danger of falling into that same trap. (Correction – the filmmakers are Irish. See also comments)

Of course, dreadful things happened in Victorian-era Ireland, but some hint of the complexities of the relationship, quite why the authorities were so concerned about the IRA of 1914, or an acknowledgement of the long-lasting and damaging legacy of the Irish-American mythologising that Olcott was part of, would have been welcome. Otherwise, it’s just half the story. 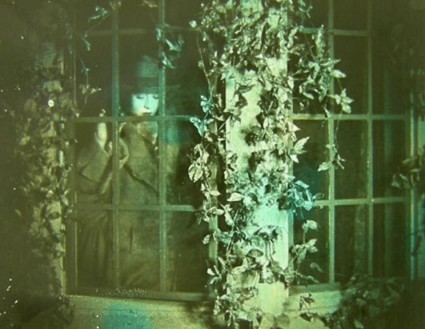 The scene of more controversy after the dinner break; the first chance for us to see what remains of The White Shadow (UK 1924), rather hyped in the world media as being an Alfred Hitchcock film, whereas the director was the then much acclaimed, and now much maligned, Graham Cutts. This controversy is quietly reflected in the catalogue; unusually there are two essays on the film within; one as per the media story, which only mentions Cutts in an unflattering quotation from an American writer and Hitchcock expert – who may or may not have seen any of Cutts’ other excellent films lacking Hitch’s involvement; and a welcome contrasting piece written with obvious diligence by Geoff Brown, detailing Cutts’ place at the front rank at the time, and the production difficulties he faced. When quoting a journalist’s eye-witness account of Cutts shooting a scene, there is the waspish aside “Hitchcock, it seems, was busy elsewhere that day.” Which does beg a question or two I don’t have an answer for; what exactly is the evidence for Hitch’s omnipresence, now engraved in the film’s credits, aside from the Master of Suspense (and Self-Publicity) saying so in an interview forty years later? Anything more contemporaneous with events? And, if he was so talented and indispensible to the studio, why was it a further two years before Michael Balcon allowed him to helm his own film?

Anyway, all a distraction from the film itself; what survives is three reels-worth of an American release print bearing “Selznick” branded title cards. It starts very promisingly indeed; after the modern titles, we meet rich, smooth American Clive Brook and English rose Betty Compson on board ship heading to England; a nicely understated scene, well and charmingly acted. Cut – a chunk had gone at this point, whole minutes I think; whether from Anno Domini or the scissors of Mr Selznick’s minions isn’t too clear – and we’re already in Devon, and Clive is already getting confused by the Compson twins. In an effective scene at the house, the Compson twin we have met onboard arrives to surprise her fighting parents and her less vivacious twin; I assume it was done in the time-honoured fashion of spilt-screen double exposure, and it was highly effective, and technically excellent. Much that follows is a mixture of randomly-surviving footage and modern titles filling in the complex tale from period synopses. If ever there was a film that didn’t need incomplete survival, this was it – and it’s hard to judge the performances as we are not always sure if we are watching the twin we think we are, or the other one pretending to be her. Clive looks permanently baffled, but then so were we, and the indications are, that this may also have been the case when the film was new. But what survives does so nicely, the print with its delicate tinting retains top photographic quality, and whatever one may think of the hype, we must be grateful to those in New Zealand who preserved, identified and then made available the remains for us all to see.

The other part of this main event was a screening of Borderline (UK 1930), officially British, but made in Switzerland by the group of ex-pat intellectuals who published Close-Up, the magazine that seemed to spend much of its energy decrying the British film industry and its product, and whose malign influence is still detectable in 2012, when mainstream British productions of the silent era are dismissed unviewed. The catalogue notes failed to dispel the notion that it was likely to be pretentious nonsense, so I chose to leave – I was noticeably far from alone in that – and had a rather wonderful, relaxed dinner with good friends of a similar disposition. (It’s a lot better than you might think.- Ed.) Which meant that I also missed, regrettably, an Italian 1913 comedy about adultery in an Italian cinema which sounded fabulous from its catalogue entry. Thus we are made to pay for our prejudices …

Some forthright opinions there from the Mysterious one, which you might like to comment on, be it the myth of Ireland or the myth of Hitch. It sounds to have been quite a day, though I’m heartily glad I missed the vulture.