There are times – usually in the daylight hours – when your scribe turns his attention away from silent films and earns his daily crust working as the moving image curator at a well-known national library. As such I get involved in broader matters to do with the study, care and availability of the medium, and it was with this particular hat on that I attended Screening the Future 2011: New Strategies and Challenges in Audiovisual Archiving, held this week in Hilversum, the Netherlands.

Did it have anything to do with silent films? Well, yes, in the general sense of planning for the future care of the moving image heritage. And there were issues raised, and matters to contemplate, which I think would be worth sharing. So here goes.

The event was organised by PrestoPrime and PrestoCentre, interlinked projects funded by the European Union as part of a decade-long programme looking at how film and broadcast archives should plan for the future by sharing knowledge of best practice. In particular the aim is to prepare these archives for the inevitable digital future. The conference was held at the architecturally stunning Netherlands Institute for Sound and Vision (Beeld en Geluid), located in Hilversum’s Media Park – the archive of Dutch television and radio located next door to its main broadcasters and producers.

Film vaults at the Netherlands Institute for Sound and Vision

The conference was clearly popular, as they could have sold twice the number of tickets that they did. Attendees were split roughly 50/50 into archivists looking for the best way to manage their holdings, and vendors anxious to sell them the products and services to enable them to do so. There were some starry speakers: Antoine Aubert from Google; Internet Archive founder Brewster Kahle; film preservationist Jim Lindner of Media Matters; James Snyder, Senior Systems Administrator at the at Library of Congress’ National Audio-Visual Conservation Center; BBC Senior Research Engineer Richard Wright; digital video archiving guru Jeff Ubois; Daniel Teruggi, head of France’s Institut National de l’Audiovisuel; and Javier Hernandez Ros, Head of Unit Cultural Heritage and Technology Enhanced Learning at the European Commission.

We were there to discuss such big questions as What are we preserving? How can we fund our future? Where do archives meet IT? How will we keep our archives in good shape? and (painful as it is to write) How can we valorise our archives? A lot of the argument was inspired by a recent report, The New Renaissance, by the EU body Comité des Sages, which was published in January 2011. The report comes with a fascinating appendix, The Cost of Digitising Europe’s Cultural Heritage, prepared by Nick Poole of the Collection Trust. The report looks at the costs of digitising audiovisual collections, including the variables and the scales involved, comparing such costs with other things the EU member states might want to spend their money on. We are told that the total cost of digitising the cultural material in the EU (i.e. libraries, museums, national archives and AV collections) would be €105.31bn, of which AV collections alone would be €4.94bn. We are asked to consider the price of one Joint Strike Fighter (a fighter aircraft), which comes to €147.41m (excluding annual maintenance costs). For that money you could instead be

Europe being a peace-loving continent, and moreover a continent generally in favour of state funding, there were many who wanted to divert funds from the air forces to digitising our cultural heritage, so the €100bn figure was much bandied about. Brewster Kahle of the Internet Archive was scathing about this, pointing out just how many millions of film, sounds, websites and book titles his organisation has been able to make available for free online for a fraction of the sums being advocated by the Europeans. It all seemed so easy, if you apply Kahle’s ingenious lateral thinking and bold attitude towards copyright laws as presently constituted. The audience at Hilversum was torn between its free spirit aspirations and its dismay at Kahle’s seeming indifference towards rules of ownership that public sector institutions and broadcast archives are bound to observe.

Is Kahle a rogue, or a right-minded libertarian? Were his detractors in the audience only seeing the bars of the cage while he sees the gaps in between? That’s for others to debate. Instead, I was interested in the vision of archives that was being to presented to us. In times past, a conference about archives would have touched on the care of film stock, film handling skills, cultural priorities, aesthetics, and so on. We understood that we were talking about a craft, as well as all the economics and politics. But in Hilversum we heard speaker after speaker talk about project plans, workflows, metadata, file formats, wrappers, bit rot, master files and proxies, scalability, checksums, fixity checks, terabytes, petabytes (1,000 terabytes) and exabytes (1,000 petabytes). It was all about feeding the machine, the machine that the audiovisual archiving world is turning into as we put in analogue on a mass scale at one end and spit out digital files at the other. James Snyder from the Library of Congress told us that, in the future, we would have to eliminate humans from the process as much as possible (humans create errors), adding that

We are the last generation to have worked with analogue in the production environment. The next will have to be taught.

Gradually the pieces of the audiovisual archiving puzzle are coming together. You have the object to be digitised, the metadata standardised, the workflows agreed, the file formats accepted, the systems built, the processes understood and agreed internationally. And if you don’t spend all your money on jet fighters, you may even to be able to pay for it.

The future of film archiving is rows and rows of servers, nurturing digital files forever. Once you have digitised, that’s not the end of it. New formats and standards keep on coming in, and you have to migrate what you have digitised on a regular basis to ensure you’re not losing anything, maybe every 5-7 years re-digitising from your master files, so the machine will keep churning away, into infinity.

The love of the medium will be gone. The physical sense of the medium will vanish. Archivists will no longer be craftsmen or women, they will be process managers. Arguments in favour of supporting moving image preservation (which will be a never-ending procedure) will be harder to make to politicians and funders, because there will be nothing with any romance to show them, except those rows and rows of whirring machines – and what can be shown on the screen itself. We’ll still have that. And access will be sensational. We’ll have everything available one day: every extant silent, every feature film, every TV programme imaginable, every YouTube video, all probably accessible at the touch of a icon on your smartphone. But the medium itself, and the archive profession that exists to preserve its value for the future, will have lost not a little of its soul. I guess it’s the price we pay for finally coming up with the perfect archive. 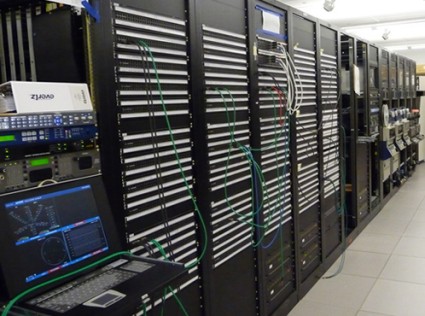 Inside the National Audio-Visual Conservation Center, from http://www.pictureshowman.com