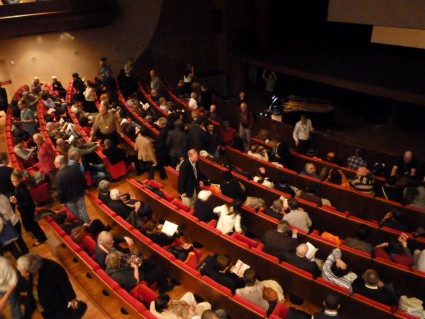 In case you hadn’t noticed, 2011 is upon us, and in case you are wondering how you are going to fill it with worthwhile cultural activities, here’s what the year ahead holds for us in the way of silent film festivals, conferences and such like. Information on these is (or will be in due course) given in greater detail in the Bioscope’s Conferences and Festivals sections, while a summary listing of all events coming up is maintained in the Calendar section.

Things kick off in January with Slapstick, the annual festival of slapstick film celebrated in Bristol, UK. This year’s event takes place 27th-30th and features the usual mix of silent comedy greats (Chaplin, Keaton, Langdon) alongside live comedians of today (Neil Innes, Graeme Garden, Barry Cryer) – plus Kevin Brownlow and Shaun the Sheep (sadly not at the same time). The StummFilmMusikTage Erlangen is a festival of silent film music held in Erlangen, Germany. The 2011 festival dates haven’t been announced as yet, but they always seem to leave it to the last minute.

February sees the San Francisco Silent film Festival’s Annual Winter Event on the 12th. The Kansas Silent Film Festival is held annually in Topeka, Kansas. This year’s festival takes place 25th-27th and has as its special guest Harold Lloyd authority Annette D’Agostino Lloyd. Films to be featured include Speedy, Chang and Wings. The august-sounding First International Berkeley Conference on Silent Cinema will be held at Berkeley, University of California, 24th-26th on the theme Cinema Across Media: The 1920s.

It’s all happening in March. We have the annual Cinefest, at Syracuse, New York, scheduled for 17th-20th, programme to be announced. The enterprising Killruddery Silent Film Festival takes place 10th-13th in Bray, Ireland, though the website is still showing the 2010 programme. A new silent film festival makes its appearance this month. The Hippodrome Festival of Silent Cinema, billed as Scotland’s first, will held in Bo’ness, 18-20 March. More news on this nearer the time. Over 24th-27th there’s the small Festival du film muet held at the Café-Théâtre Barnabé, Servion, Switzerland. Starting in March (30th) and ending in April (7th) is the Toronto Silent Film Festival, now in its second year, with Maciste all’Inferno (126), Faust (1926), It (1927) and more on the bill. For the specialist, The Construction of News in Early Cinema is a seminar (conference really) being organised by the Museu del Cinema and the University of Girona, Spain, 31st March-1st April. Expect a report from the Bioscope on this, as I’m a guest speaker.

April sees the British Silent Film Festival, which returns to the Barbican in London 7th-10th with the theme Going to the Movies – Music, Sound and the British Silent Film. It takes place in conjunction with the Sounds of Early Cinema in Britain conference taking place 7th-8th at the Institute of Musical Research and the Barbican. Doing Women’s Film History: Reframing Cinema History is a conference with a strong silent cinema element taking place 13th-15th at the University of Sunderland, UK.

In June we have the festival of silent cinema held annually at Hautes-Pyrénées, France, the Festival d’Anères, usually held in May but now shifting to June 8th-12th. No programme details as yet. In Bologna, Italy there is Il Cinema Ritrovato, the outstanding festival of restored films (always with a strong silent element). No dates or details of the programme have not been released as yet. The Broncho Billy Silent Film Festival will be held at Fremont, California in June, but again no dates yet.

July sees The Second Birth of Cinema: A Centenary Conference, to be held over 1st-2nd at Newcastle University, UK. André Gaudreault, Philippe Marion, Joe Kember and the ubiquitous Ian Christie are promised as keynote speakers. San Francisco hosts the San Francisco Silent Film Festival, this year over 14th-17th. Expect programme information in May. Slapsticon is the annual festival of silent and early sound film comedy, held in Arlington, Virginia, which this year is 14th-17th. Or there should be the International Silent Film Festival, a festival of classic silent films held each July in Manila – no dates or programme available as yet. One of the impressively-programmed silent film festivals of last year was StummfilmLiveFestival, held by the Babylon Kino, Berlin. This year’s festival runs 16th-31st and promises to be just as eye-catching with a complete retrospective of Charlie Chaplin’s films.

Then there’s August, which gives us New York’s Capitolfest, its annual summer classic and silent movie festival, taking place 13th-14th. Janet Gaynor is the featured star. Aosta in the Italian Alps hosts Strade del Cinema, a silent film festival with a strong emphasis on musical acompaniment (no exact dates or programme released as yet – they invariably leave things until the last minute). In São Paulo, Brazil there’s the always very good Jornada Brasileira de Cinema Silencioso, a silent film festival now in its fifth year (no exact dates or programme details as yet). It’s a busy month and Bonn in Germany will have its Bonner Sommerkino, a festival of silent film which is yearly growing in importance, this year taking place 11th-21st.

September kicks off with Cinecon, the annual classic film festival held in Hollywood, which runs 1st-5th, followed closely by Finland’s Forssa Silent Film Festival, also known as Mykkäelokuvafestivaalit, which takes place 2nd-3rd. The charming Opitiki Silent Film Festival will be held this month in Opitiki, New Zealand. Over 22nd-25th there’s the silent and early sound film festival Cinesation in Massillon, Ohio, USA, while over the 23rd-24th we have the Annual Buster Keaton Celebration, the Buster Keaton-themed festival held in Iola, Kansas. Silents of a different, modern kind feature in the Toronto Urban Film Festival, a public film festival of one-minute silent films held in Toronto, Canada. No dates as yet.

October is of course Pordenone month. The Giornate del Cinema Muto, or Pordenone Silent Film Festival, takes place in Pordenone, northern Italy, and in 2010 runs 1st-8th. So far we’re promised The Wind with live orchestra conducted by Carl Davis. The queues are probably forming already. Also in October, but no dates or programme announced as yet, should be Australia's Silent Film Festival, held in Sydney.

I don’t have much information on them, having not covered them before now, but November should see the Bielefelder Film+MusikFest in Germany and December is the time for Poland’s Festival of Silent Films, held in Krakow and organised by Kino Pod Baranami. Both seem to be well-established annual festivals.

If you know of other festivals or conferences I should be including, please me know through the comments. I’ll be adding new events (or updated information) to the Conferences and Festivals sections in any case, and will publicise individual events nearer to their start times in any case. Of course, silents turn up as special screenings in other kinds of festival, such as the London Film Festival and Telluride Film Festival, but I’ve kept this listing to those events largely dedicated to silent films themselves. Such festivals and conferences are a labour of love and a huge challenge to put on, logistically and financially, particularly in these difficult times – do support them if you can.