May 14, 2010 By urbanora in Archives and museums, Preservation, Technology Tags: Silent films 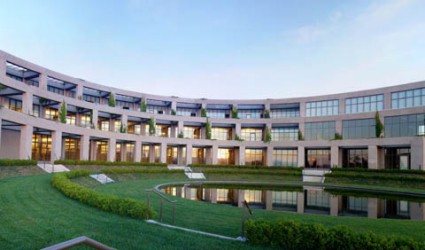 The National Audiovisual Conservation Center of the Library of Congress, Culpeper, Virginia

When good film archivists die, they’ll probably go to Culpeper. Or somewhere quite like it. Culpeper VA is home to the National Audiovisual Conservation Center (NAVCC) of the Library of Congress, a state-of-the-art film preservation centre funded by Packard half of Hewlett-Packard and a temple to the art of preserving the film heritage – 1.1 million film, television, and video recordings, to be precise.

The reason for mentioning the NAVCC is to introduce an engrossing account of the scale of the work that goes on there, written by Ken Weissman, Supervisor of the Film Preservation Laboratory. The piece, ‘The Ultimate Archive System‘, was written for Creative COW Magazine, and although it covers the breadth of the Library’s film collection across the last century and more, it has much to say about the treatment of its earliest films:

Here, for example, is what he writes about paper prints, which were once treated photochemically but are now being tested for digital restoration:

We started as a photochemical laboratory, and are primarily a photochemical laboratory to this day. It has only really been in the past half a dozen years, or less, that you can even begin a conversation that might convince people in the know that preserving motion pictures might be done digitally. So here in our lab, we began a pilot digital project for a very special collection that we have in the Library of Congress: the paper print collection.

A process was invented to literally create long strips of photographic paper, exactly the size of 35mm film stock, and then create contact prints from the original 35mm negatives, onto those long strips of paper. These were then deposited with the Library.

There are over 3000 titles within that collection, some of the earliest films ever made — from 1894-1915, with the vast majority from before 1912. Most of them are unique. In other words, these paper prints are the only copies of these films. They represent the single largest collection of early motion pictures in the world, by far. The Library is rightfully very proud of this collection.

The paper prints had been locked in a vault in the bowels of one of the library buildings, and rediscovered by librarian Howard Walls in the late 30s. The paper itself is still stable, but for the most part, you can’t see the images very easily except by looking directly at the paper — where of course there is no motion.

This is why there have been several attempts over the course of history since their rediscovery to put them back on film. One of the first was by Kemp Niver, and his company called Renovare. He took these 35mm prints (and there are some that are actually a larger gauge than that), and re-photographed them using a clever device that he built, printing to 16mm film. We have used various models of these Niver printers, including one where we replaced the 16mm camera with a 35mm camera, in order to print back to 35.

All of the processes have been interesting, and they’ve all been successful to some degree. However, they’ve also been unsuccessful to a great degree, in that the images are alternately soft, or fuzzy, or very shaky. There was also no way to accurately register the images. In fact, we’ve concluded that in many cases, the images aren’t very well registered on the paper.

The obvious solution is to scan the images, then take advantage of digital processing to stabilize them, correct positioning and so on. Our first scans of the paper prints were 2K x 2K, which theoretically should have been good enough, but in our analysis of the imagery, we think it might be better to go to 4K x 4K. But that’s one part of the pilot program, to figure out exactly how to do it. It’s more of a theoretical workflow because we haven’t practically implemented it yet, but we’re getting close.

Georges Méliès on a Library of Congress paper print

From film to paper to film to a row of ones and noughts – these particular ‘films’, a great many of which no longer exist in any other form than the paper on which their successive images are now held, would seem to be ripe for digitisation. But for Weissman, digitisation is essentially a means for returning the images to film. He argues that knowledge of of how ambient temperature and relative humidity affect decay, measured in a Preservation Index, means that film which under normal conditions might only last fifty years before serious degradation sets, when “stored at 25F and 30% relative humidity, you can expect it to last 40 times longer than that – 2000 years.”

That’s why, as we move further into digital technologies, the plan for now is still to scan the images, restore or preserve them as needed, then run them back to film, and put the film away at 25 degrees, 30% relative humidity, for practically forever. For most people, in practice, somewhere between 600 and 2000 years is beyond forever. Because frankly, once you get to that point, what are you really worrying about?

It reads likely a strangely regressive strategy, which so many other institutions are looking to become every more the completely digital library. But film takes up space, digitally speaking – one frame scanned at 4K amounts to 128MB, he informs us, or 24 terabytes for the average feature film. And then you’re not done with it, because you’ll probably have to migrate the files after five years “to the next greatest things”, and have back-up copies, and back-ups of backups, and then repeat the processes five years after that, and then again and again, and keep on paying for it all…

But what also drives Weissman is the love of film itself. A digital file tells you nothing until you can find the kit to run it (if it hasn’t become obsolete in those five years). But with reassuring filmstock all you need is a light source, a lens and a screen, and you can see what you’ve got. And it takes you back to what you started from. “I can’t help feeling in my heart of hearts that the simple solution is usually the best” he argues, adding “and film is a pretty simple solution.”

Film archivists like film, and arguments that film might actually be the best, even the most economic form for storing film long term, is bound to appeal. Until they stop producing film stock, of course. And then there are all those ‘films’ that weren’t ever on film because they were made digitally in the first place, which is what we’re making now. That might at least make the NAVCC’s challenge a finite one, because there will come a point when we stop producing films on film and so you’ll have a measurable problem. But what gets done with the 21st century’s motion picture medium of choice – born digital – doesn’t get mentioned.

It’s not easy having to think about keeping an impermanent medium forever.