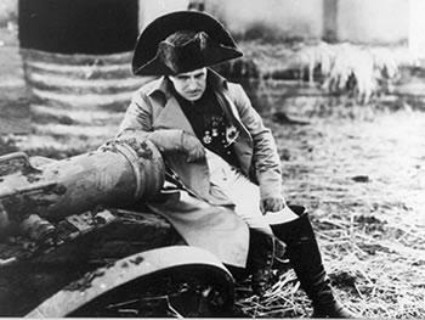 Charles Vanel as Napoleon in Karl Grune’s Waterloo (1928), from http://www.southbankcentre.co.uk

The Bioscope normally avoids covering news of single film screenings. Requests come through from time to time suggesting that there be a Bioscope service advertising silent film screenings and not just festivals. My answer each time is that I’m not able to maintain such a service to the extensive level that would be expected of it, and instead I refer people to the Silent Screenings section of Nitrateville and (for information in the USA only) to the Silents in the Court and Silent Era sites.

But here’s an exception. 22 April sees the UK premiere of Carl Davis‘ score for Waterloo (Germany 1928), directed by Karl Grune. The screening will be at the Royal Festival Hall on London’s South Bank, with the Philharmonia orchestra conducted by Davis.

Abel Gance’s epic Napoléon, for which Grune’s film was conceived as a response, does not include the Battle of Waterloo. Gance’s film (which he madly hoped would be part one of six) ends with the invasion of Italy. Grune’s film tells the story from the German point of view, focussing on Blüchner (Otto Gebühr) who comes to the aid of the Duke of Wellington (Humberstone Wright) to defeat Napoleon (Charles Vanel). Grune looked to Gance’s film not only in theme but in technique, with spectacular battle scenes crowned by split screen images, though it is (by reputation) a far more conventional historical costume drama overall. Carl Davis has likewise looked back to his famous 1980 score for Napoleon, stating that his score is intended to be a follow-up, combining music from the period with his own.

A DVD of Waterloo is promised from Edition Filmmuseum (see its forthcoming releases list), but there is no indication that the release will feature Davis’ score. Abel Gance’s Napoléon, famously restored by Kevin Brownlow, is regrettably one of the more elusive of silent films these days. For its American release, the restored film was cut and put to a score by Carmine Coppola, Francis Ford Coppola’s father, which is the only version allowed to be screened in the USA. This has hamstrung the film’s availability, not least on DVD. If you don’t mind an inferior restoration with Coppola’s frankly second-rate score, the film is available on DVD from Spain in a two-disc format. But remember that Brownlow’s restoration of the film (last screened in the UK in 2004) is over ninety minutes longer, with more accurate editing, better print quality, and colour tinting – as well as Davis’ ever-expanding score for live performances.

Information on the screening of Waterloo is available from the Philharmonia Orchestra and South Bank Centre websites. The screening starts at 7.00pm and is proceeded by a free introductory talk at 5.45pm by film historian and film music authority John Riley.