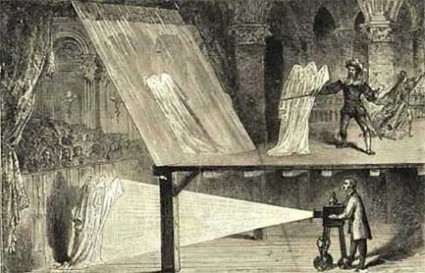 Monstrous Media/Spectral Subjects is the enticing title of the Ninth Biennial Conference of the International Gothic Association. The conference takes place 21-24 July 2009 at Lancaster University, and it touches pre-cinema and early cinema themes, with much else besides, as the conference description explains:

Gothic forms and figures have long been bound up with different media, from the machinery of Walpole’s modern romance to Robertson’s phantasmagorical shows in the eighteenth century; from uncanny automata to ghostly photographs and monstrous kinetograms in the nineteenth; from cinematic shocks to digital disembodiments in the twentieth. More than merely exploiting new technical developments in cultural production and consumption, the Gothic mode, in adopting and adapting new media, engages with excitements and anxieties attendant on social and technological change.

Examining conjunctions of literary, visual, spatial and digital texts in relation to spectral and visceral effects and affects, the conference aims to stimulate discussions of the relationship between the Gothic novel and other cultural forms, media and technologies. Doubling the monstrous with the spectral, it sets out to explore the cultural production and consumption of monsters and ghosts from the eighteenth century to the present.

Topics expected to feature in the conference include:

The call for papers has passed, and they report an overwhelming response which is making the selection of papers take longer than expected, so no programme as yet. However, the plenary speakers will be Elisabeth Bronfen, Tanya Krzywinska, Marina Warner and Christoph Grunenberg.

More information now, and later, from the conference website.