This is the ninth and final part of the reminiscences of Edward G. Turner, pioneer British film distributor with the firm of Walturdaw. The series of articles was originally published in the Kinematograph Weekly, 17 June, 24 June, 1 July and 15 July 1926, under the title ‘From 1896 to 1926: Recollections of Thirty Years of Kinematography’. Other film veterans supplied pieces to the journal at this time – Will Day, Jack Smith, James Williamson, Frank Mottershaw, E.T. Heron, Will Onda, Monte (Monty) Williams – which makes June/July 1926 in the Kinematograph Weekly an area well worth investigating by film historians. Here Turner recalls business during the First World War, through to the 1920s and the demise of the Walturdaw film renting business.

Then the fatal year of 1914 arrived. In February of this year, Walker came to me and said, “Turner, our ten years with the Walturdaw Company expire in Auust, and I have the opportunity of taking over all of the products of the Famous Players organisation; putting them on the English market on a renting basis, part cash and sharing.

“Will you join me when our time expires, or, if not, will you get my release from the Company, as this is too great an opportunity to let pass?”

As he still had six months to serve, I promised to do my best, and at a board meeting held a fortnight later, I secured his release, and the Walturdaw Company gave him a farwell dinner at the Monico on March 17, and so our eighteen years of partnership closed. J.D. Walker founded the Famous Players organisation in this country.

My old friend and I had shared hardships and success together; we had had many ups and downs and many pleasures. We had seen the kinema Industry grow from nothing to an important Industry. We were well matched for a business partnership: he had imagination, inspiration, and his head was always full of schemes; in fact, he was nearly a genius in this respect, but like all people of this type, he had not the patience or the determination to carry out his schemes; in other words, to come down to the hum-drum process of bringing his imagination to concrete facts.

I am not brilliant in imagination, neither am I a genius, but I have the faculty of dogged determination and perseverance, and the knack of geting down to things and working them out to their logical conclusions. This is very essential to bring brilliant schemes to a practical end.

I believe we both made a mistake in parting: we had got to know each other so well, he to scheme and I to carry out, that we were both somewhat lost when we parted, and I believe that had we not done so, his name to-day would be a household word, as it was in the years of which I am speaking, and both our fortunes would have been on a higher plane.

In August, 1914, the Great War started. We had many thousands of pounds worth of German film just issued, or about to be issued. In two months its value was the price of scrap for melting down to make dope for our aeroplanes. This was a first big knock.

The following three years were ones of anxiety in every respect for everybody, but we all did our best to keep the flag flying. We had 95 per cent. of our our staff in the Army – all volunteers, and we had to keep the business going to provide a place for them when they came back, if they ever did. Out of our entire male staff there were only two other man and myself left, we either being over age of permanently turned down as physically unfit.

The year 1918 found me in communication with J.D. Williams, who just then had founded the First National Pictures in America, with English rights in view, and I secured these for my company in face of great opposition. 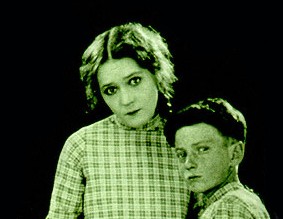 Mr. Williams had gathered under his banner practically all the great artistes of America, including Mary Pickford, and I secured three of her productions: “Heart o’ the Hills,” “The Ragamuffin,” and “Daddy Long Legs.” For these I paid a record figure, but all the world knows what a huge success “Daddy Long Legs” was, and then we began to get films quicker than we could put them out, which is nearly as bad as not getting enough, because they could not be worked out to their capacity.

In the year 1920, a great slump took place in the English poound in America. We were having weekly consignments over, and as we were paying dollars against the depreciated pound, our losses in this respect amounted to over £30,000. Then the company with whom we had fixed up our programme for 1923 and 1924 began to fail in delivering to time, and eventually stopped altogether. This was the third great block, becuase it left us with a big organisation and nothing to put out to the exhibitors, and finally, the Walturdaw Company had to close down, going into voluntary liquidation.

But the Walturdaw Cinema Supply Company, of which to-day I am a director, sprang up from its ashes like the Phoenix of old, and we are carrying on the traditions of the old company – carrying all its personnel, and I am sure the good will of the thousands of old clients.

Such is the review which has passed before my mind during the time I have been jotting down this article and it practically gives the life story of the kinema trade.

Turner’s optimism was not ill-founded. The Walturdaw Cinema Supply Company continued as a successful provider of cinema equipment for decades. Turner himself became a senior figure within the film industry. He became chairman of the Kinematograph Renter’s Society and the Kinematograph Manufacturer’s Association, and president of the Cinema Veterans Society. He died in 1962.

The previous parts of Turner’s memoir are available here:

Part 1: The first film shows
Part 2: Popular film titles of the 1890s
Part 3: Pitching the product to the working classes, and developing film renting
Part 4: Exhibition in the 1890s and the effect of the Bazar de la charité fire
Part 5: The London County Council’s fire regulations and the cinematograph business
Part 6: The hiring business and establishing the Walturdaw name
Part 7: Developing fireproof equipment
Part 8: Flicker Alley and the rise of the exclusive film.