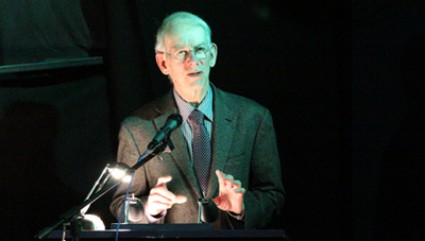 Just a short note to alert you to the existence of a video made of a talk Kevin Brownlow gave to the Centre for Research in the Arts, Social Sciences and Humanities at the University of Cambridge on 20 October 2011. Entitled ‘The Impact of Silent Film‘, it is a lecture with film clips and runs for 93 minutes.

When I saw the title I wondered whether Kevin had been cajoled into delivering some bold piece of socio-economic analysis which would seek to prove to government that watching a silent film a day will make each one of us healtheir, wealthier and wiser (and who’s to say if that might not be true?). But instead it is an account of silent films as the progenitor and pinnacle of motion picture art (“every visual advance, except CGI, was invented before talkies”), demonstrating innovation from “single-shot films of 1893 to the monumental epics of the 1920s”. It is illustrated with clips from his celebrated Hollywood series (albeit filmed from the screen in the Cambridge lecture theatre) and shows that his great belief in the medium continues completely unshaken.