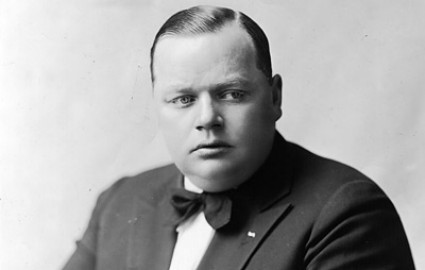 In 1921, after three trials, Roscoe ‘Fatty’ Arbuckle, popular film comedian, was acquitted of the manslaughter of Virginia Rappe at an archetypal wild Hollywood party. The Arbuckle case, because of its lurid features, continues to attract prurient interest, while solid information on what actually happened in what was undoubtedly a key moment in Hollywood history becomes ever harder to find, such is our thirst for conspiracy and lowering tales of human fallibility.

A one-woman mission to unpick fact from fiction is being conducted by Joan Myers (aka Frederica Merrivale), whose investigations into the Arbuckle case and the background of the little-known Rappe, have been highlighted here before. Now she has published a lengthy piece on the New Research in Feminist Media Art/Theory/History blog. Entitled The Case of the Vanishing Juror, it traces the the story behind the first Arbuckle trial (there were three – the first two ended in hung juries, at the third he was acquitted) and the legend that grew up that there was a hung jury at the first trial owing to the intransigence of one stubborn female juror, Mrs Helen Hubbard.

I won’t recount the details here – you should read Joan’s article instead – but essentially she re-examines in depth the newspaper record to recover Mrs Hubbard’s reputation (see this account for an example of how she has been described in the past, supposedly with fingers in her ears during the defence’s case) and to go in pursuit of the ‘missing’ juror (Thomas Kilkenny), because the first trial was hung by a vote of ten to two. Kilkenny was similarly convinced of Arbuckle’s guilt, but he was not subjected to the insinuations about his motives as was Mrs Hubbard. It’s an exemplary piece of work, well grounded in in an understanding of legal procedure (women had only begun serving on juries in California in 1911, and their presence was still controversial for some). Its primary achievement is to make us reject the muddle of myth and innuendo that surrounds the case and makes us yearn for a historiographically rigorous account of the trial (Myers is scathing in her assessment of David Yallop’s The Day the Laughter Stopped, which is considered the standard work on the Arbuckle story). The method has been convincingly displayed – now let’s have the history.