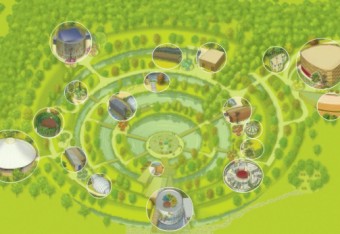 From time to time I pursue the etymology and the many uses of the word ‘bioscope’. So, let us journey to Ungersheim, Alsace, France, where you will find Le Bioscope. This is an environmental ‘leisure and discovery’ park, the intention of which is ‘to educate people to take responsibility for their own actions with respect to equilibrium with the environment’. As can be seen from the picture, it is organised in concentric circles, evoking the shockwaves caused by a meteorite which fell nearby in 1492. It is very much a ‘view of life’ (to cite the original meaning of bioscope), with the bio emphasising the biosphere, human biology, and the general interaction between Man and the world around him. It does have a cinema – Le Biorama. And for children there are lots of dinosaurs. It opened in June 2006.